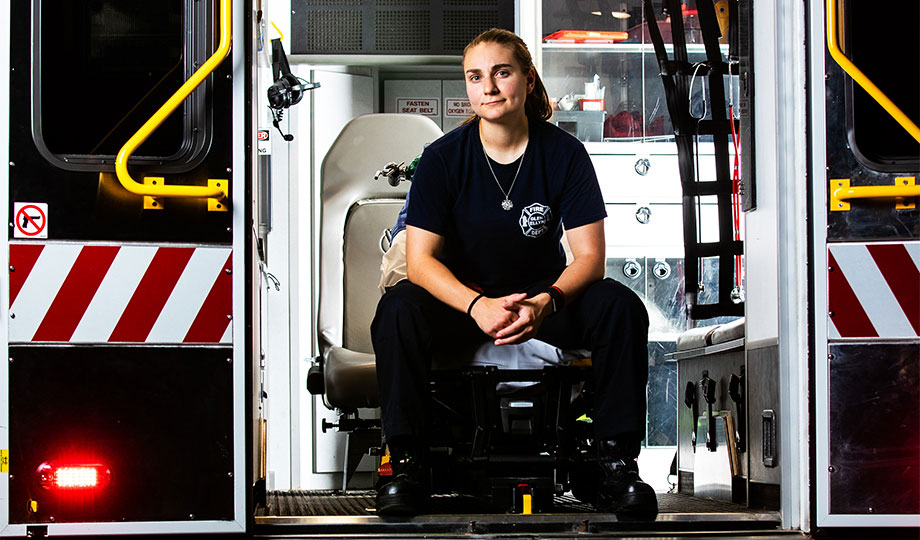 Maddy Peterson is the first person to jump in and help people.

“I’ve always been the type of person who runs toward the screams while everyone else runs away,” she said. “Being in the EMS field allows me to utilize all my strengths.”

Peterson, who earned her EMT license and PEPP certificate for pediatric assessment, chose College of DuPage because she lives in the neighborhood and knew its EMS programming was strong. After completing the Trauma Assessment, Pediatric Assessment and Paramedic Transition courses at COD, she applied to medic schools. She tested into and interviewed for a seat in Good Samaritan’s program and was accepted.

“I honestly feel that I wouldn’t be as good of an EMT if it weren’t for COD, its faculty and the resources,” she said. “Because of the street scene, we were able to effectively practice skills every day. We practiced car extractions with real cars, not like most other EMS programs that would pretend with chairs. Having the large space allowed for the instructors to set up different assessment stations, which took away the sitting down and waiting your turn aspect.

“You could tell that every instructor wanted each student to achieve success. They wanted to make us the best that we could be. They come from backgrounds of working in the field for years and years, and they were able to share their personal experiences with us about real-life situations.”

Peterson finished paramedic school, during which she completed 480 hours of ride time with the Elmhurst Fire Department.

“The year of Paramedic school was jam-packed with exams, practicals, clinicals, ride time and lots and lots of sleepless nights,” she said. “Would I trade it for anything? Absolutely not. If anything I’ve grown more passionate towards the Pre-Hospital career. I’ve met some amazing people through and in class and at clinical sites.”

After passing her written state exam, she was sponsored by the Warrenville Fire Department to complete COD’s Fire Academy and was hired as a part-time firefighter/paramedic.

“The Fire Academy was hands down the most fun I’ve had in my life,” she said. “Lots of blood and sweat were put into it. We were put into companies of three or four and would be at training towers with zero visibility and extreme heat. One company would bring the hose into the building, find the fire, and put it out. Other companies would search for victims. Another company would be on the roof and coordinating ventilation. We all went in to the academy as strangers with the same goal: become a firefighter. We all left being a family.

“COD brought in knowledge-filled chiefs, captains, lieutenants and other firefighters to help proctor us. Every officer was more than willing to help mold and shape us into good firefighters.”

Currently Peterson works as a full-time firefighter/paramedic on an ambulance through Metro for the Glen Ellyn Fire Department, where she is a shift supervisor and EMS coordinator. She also works part-time on Glen Ellyn’s day engine as an acting officer. As a resident of Glen Ellyn, she takes great pride in serving her community.

In the near future, she will operate the ALS chase vehicle, which means helping the ambulance on calls and running calls by herself until a mutual aid ambulance arrives. Her goals include working in the city of Chicago as a paramedic.

Peterson knows her education at COD provided a strong foundation for her career and advises any students considering the College to just do it.

“If you think it’s something that you’re interested in, try it. It’s no cake walk, but it’s incredibly rewarding. I’ve learn so much and I’ve met some amazing people. Also, start study groups. There was always a consistent five of us that would study weekly together, and we’re all family to each other now.”

Learn more about the Fire Science/EMS programs at College of DuPage.