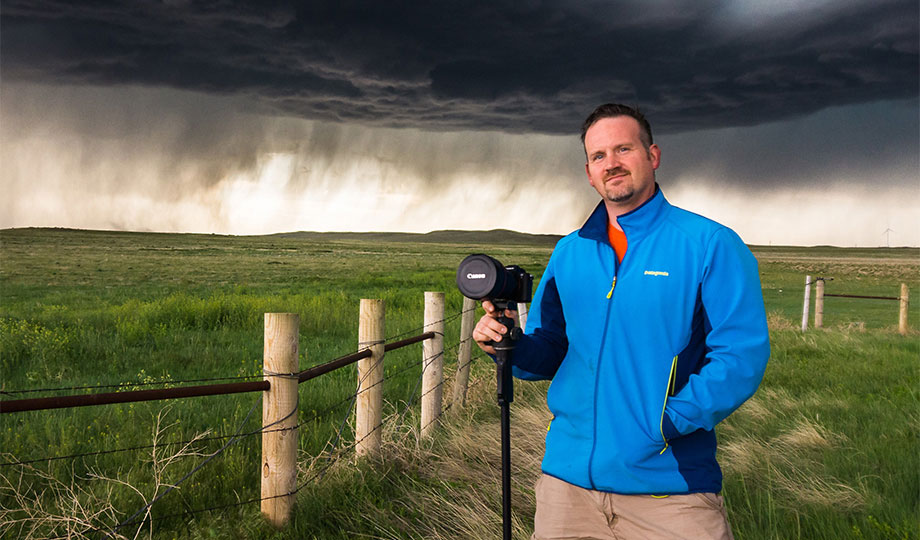 David Mayhew majored in photography. Watch the above video as David talks about his career and the positive impact of College of DuPage.

His first-ever exhibit at the Notebaert Nature Museum in Chicago included 27 framed photographs showing some of the Midwest’s most breathtaking storms. In several images, severe “supercell” thunderstorms hover over defenseless barns, while in others, tornadoes roar over quiet prairies, rousing a sense of awe and danger in the viewer.

“Most landscape photographers don’t pay much attention to the beauty of the sky, despite the sky generally occupying a large portion of each of their photos,” he said. “My approach is to seek the sky I want to photograph and then seek a subject that may enhance the scene, or I simply frame the sky and cloud formations. The severe weather of the Midwest plains provides the best opportunities for me each spring, and it takes me anywhere from Texas to Canada.”

Traveling to find the right sky to photograph is no hindrance for Mayhew. Since he left his father’s farm in rural Suffolk in his native England, he has trekked across the world, stopping in Australia, New Zealand, Fiji, Hawaii, and even making a hitchhiking trek across Canada.

Before becoming a professional photographer, Mayhew worked as an engineer after earning a Bachelor of Engineering in Product Design. An engineering job brought him to Chicago, where he met his future wife, Jennifer.

Working and living in the Chicago area also led him to College of DuPage and Meteorology Professor Paul Sirvatka’s storm-chasing courses, where he traveled up to 1,000 miles in a day searching for supercell storms – often the cause of tornados – from Mexico to South Dakota.

Investigating these courses led to other discoveries as he enrolled in the COD Photography program. Mayhew made the transition from engineer to full-time photographer and is now in Fort Collins, Colo., still chasing storms but also focusing on the mountains and the scenic Southwest. His work can be found in a half dozen galleries across the U.S. and was used in the May 2012 edition of American Scientific magazine.

He was a finalist in a National Geographic Travel contest, received Honor Mention twice in Santa Fe Workshop photo contests, and witnessed what he called "the widest ever recorded tornado" at 2.6 miles in El Reno, OK, on May 31, 2013. Twice he has won the Best in Show for Photography in Park City, Utah – in 2012 and 2014. He is also a juror for the “It’s Amazing Out There” photo contest for the Weather Channel, which he has now done for four years. And Red Bull used his images to accompany a weather article.

His work has extended to the Northern Lights in Iceland, coastal scenes and night photography. His book, “Storm Chaser: A Visual Tour of Severe Weather,” is available on Amazon and has been rated a #1 Landscape Photography book several times.

He gives much credit to the college’s Photography program, formerly headed by retired professor and coordinator Jeff Curto.

“The program for photography was very complete and in-depth, and the class size was 20 per class if not less. So you get that one-on-one attention that you would not get anywhere else,” Mayhew said. “Any question you have, you will get it answered.”

More about the Photography program