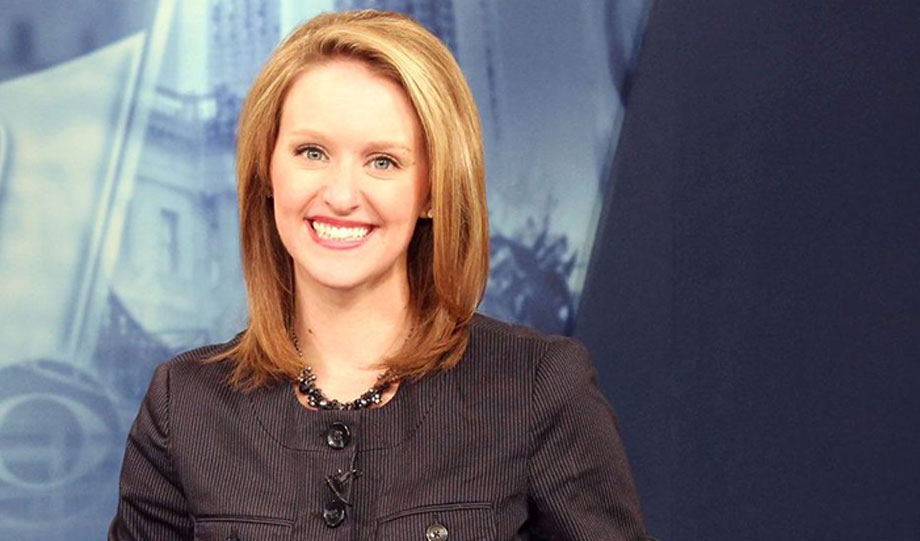 For Karissa Sanford Klos, the decision to become a meteorologist did not arrive like a clap of thunder, but rather, it came after she got her feet wet in a college course.

“It was just when I took Introduction to Meteorology,” said Klos, who entered College of DuPage following her graduation. “I needed another science credit. I was taking courses in the Honors Program at the time, and I signed up for Honors Meteorology.

“I went into it just to meet a science requirement. I came out of it knowing that it was what I wanted to do.”

Now Klos is doing what she wanted to do. She first landed a job as weekend meteorologist/reporter on the ABC television affiliate KCAU-TV 9 in Sioux City, Iowa, and then was promoted to morning meteorologist. In 2012, she moved to WMBD/WYZZ in Peoria as morning/noon meteorologist and a co-anchor of the station’s morning show. Currently she works at WeatherNation, where she started as a meteorologist and is now director of On-Air Operations.

Before working at KCAU-TV, Klos earned a bachelor’s degree in Meteorology from Metropolitan State College in Denver. She attributes much of her success in obtaining her all-important first job to having previously served as a weather center intern with KMGH-TV, ABC’s affiliate in Denver.

“I was very fortunate because a lot of people I knew had trouble getting jobs,” said Klos, who recommends the internship experience for all college students.

Klos’s meteorologist career may have started after Metropolitan State College but it was first launched at College of DuPage. Following her experience in Professor Paul Sirvatka’s introductory meteorology course, she signed up for his Severe and Unusual Weather and Forecasting courses.

Field and Experiential Learning at COD

During two consecutive summers, she embarked on Sirvatka’s Storm Chasing course, an experiential class that enables students to “chase” tornados and observe other severe weather close up in America’s middle-western region.

“It made me a believer in experiential learning,” said Klos about her summer storm-chasing courses. “You can’t feel what a thunderstorm is all about until you are standing right in front of it.

“Depending on the storm, there are two main components, the updraft – the rising air – and the downdraft – the descending air. The downdraft hits the ground hard and spreads out into an outflow. That’s one of the things you’re looking for, that rush of air from the downdraft.”

Klos also enjoyed the camaraderie from other the storm chasers who accompanied her. “Everyone in our [storm-chasing] van was great,” she said, adding that people can chase storms anywhere across the Great Plains. “You have complete trust in them and you get a little bit of an adrenaline rush each time you experience a storm.”

Klos’s passion for experiencing the power of thunderstorms firsthand may have come to light while actually chasing storms, but according to her professor, that passion was awakened in her more formal studies.

“It was great to see so much of what Karissa learned in the classroom take hold while she was on our storm chase trips,” said Sirvatka, who has taught at College of DuPage since 1989. “I remember Karissa often perusing her notes and really working to understand everything about the subject matter. There are so many helpful students around here.

“We create a community-oriented environment, and she was soon surrounded by students who were driving her to be her best. Karissa rose to the challenge and soon became one of those students who inspired others to do their best. Her experiences and education are now making a difference in her career.”

Klos, who described herself as a “math and science nerd all her life,” said that she at first considered teaching high school physics. Her parents still reside in Naperville and her father is a retired business and computer technology high school teacher.

But in between Klos’s teaching aspirations and her passion for meteorology, she also competed on the College of DuPage forensics team, an experience that no doubt helped her develop her presentation skills while conducting an on-air forecast.

Conducting those forecasts have become more of a challenge as the technology used in analyzing the weather has become more complex. There is nothing superficial about studying and reporting on the weather. A meteorologist often has to rely on her best judgment.

“It’s a double-edged sword,” Klos said. “Nowadays, we have computer models that help us in forecasting. They can all say the same thing or they can say different things. You can be overwhelmed with a lot of information. It’s a skill that you are constantly working on.”

Learn more about the Earth Science program at College of DuPage