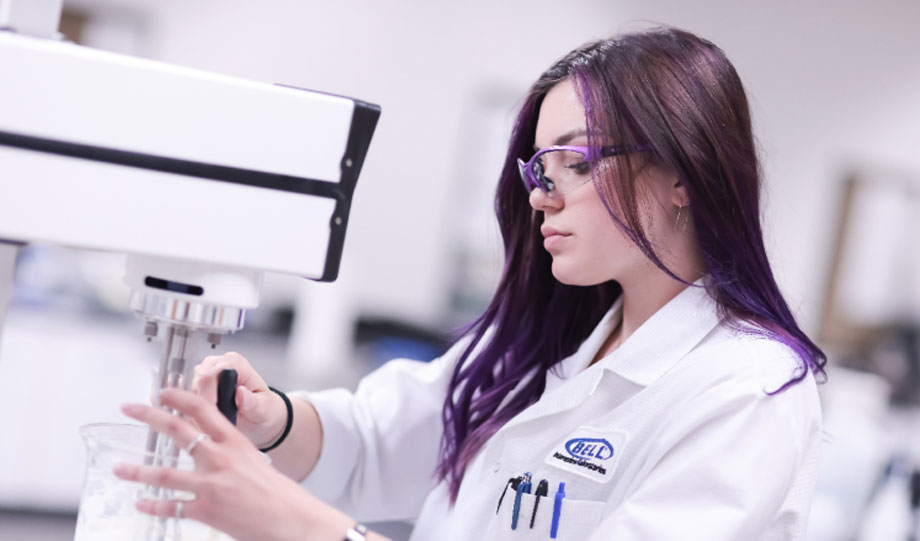 Alexis Hohman came to College of DuPage as an undecided student who thought about majoring in art.

But that changed when she took a career development class during her second semester.

“It helped me see that I liked art for the aspect of creating, but I had never thought about that concept being applicable to other jobs,” she said. “Through this class, I found the field of cosmetic science and thought it was perfect for me.”

Hohman was self-funding her education, so receiving the Presidential Scholars Award – which covers full tuition – made COD a logical choice.

“This didn’t just help me financially. It provided security to branch out and take classes I might not have considered, from geology to studio art,” she said.

She also enrolled in a seminar class about seed soil and the soul during her first semester. The class centered on food insecurity and was taught through a combination of film and environmental biology.

This class then undertook a service project to start a farm on campus and Hohman didn’t want to let the project die once the class ended.

“A few students and myself worked hard to get the garden started on campus,” she said. “After a lot of grant writing and presentations to the space and planning committee, we were successful.

“I think my passion for the garden goes back to my love of creating. Creating the garden and growing the food is an artful process that can benefit both the students on campus as well as the community.”

After earning her Associate in Science degree, Hohman transferred to the University of Toledo and graduated with a bachelor’s degree in Pharmaceutical Sciences with a major in cosmetic science and formulation design. She then worked as a research and lab technician at Bell International Labs, which makes products in skin, hair, sun and lip care, before becoming an associate scientist for Estee Lauder’s Aveda.

“I like makeup because it is art that you wear. It is something that is fun to play with and it makes people feel good,” she said. “With media development, cosmetics is a growing field and I wanted to get involved in the environmental side of it. I want to help create natural products that boost people’s confidence and are good for the environment.”

For students considering attending College of DuPage, Hohman advises them to just go for it.

“Most kids in my high school graduating class started off at four-year schools and are already piled high with loans,” she said. “Thankfully, even as a transfer student, I haven’t needed to take out loans to cover my tuition.

“Without COD, I don’t think that I would be on the path I am now. The largest class I took had 40 students in it. All my teachers knew who I was, and this pushes you to try harder. I also discovered so many different interests and hobbies that I wouldn’t have taken advantage of at a four-year school.”