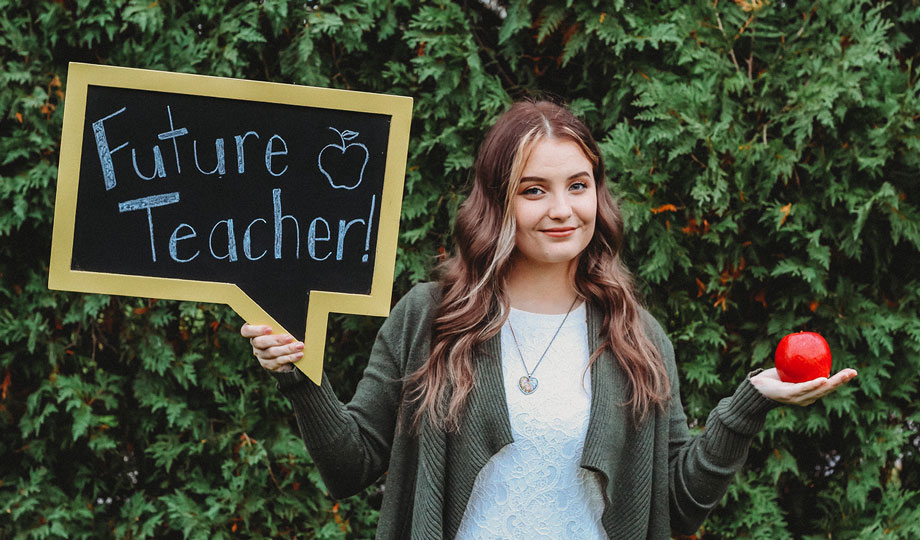 When Sydney Hamilton graduated from high school, she had no idea what direction to pursue.

“I kept changing my major as I was applying to universities, and I decided it would be a smarter and cheaper option to explore and pick a major at College of DuPage,” she said. “I started immediately after graduating and knocked out a speech class over the summer.”

Hamilton spent much of her time at COD completing her general education requirements. But an Eastern World Geography class caught her attention, and she began to develop a love for both geography and education.

“I had goals to travel around the world, but being so oblivious to the rest of the world made that difficult,” she said. “I liked social studies in high school. However, it felt like I was learning the same stuff every year, so I thought this class could be a good one to help me become more well-rounded.

“Professor Joel Quam really made the class for me beyond the interesting subject alone. I was not only learning about different cultures and countries, but I was also paying attention to his teaching style and classroom structure. His classroom was so different than all of the ones I had taken—he truly reimagined what learning should be. Geography is not just map placements and memorization, but the culture and themes are super rich and endless. I loved that Professor Quam has traveled to so many places and had information to bring back and share with us. It made the subject so much more personal and exciting.”

Geography is not just map placements and memorization, but the culture and themes are super rich and endless.

After earning her Associate in Arts degree, Hamilton transferred with an undeclared major to Illinois State University, where her counselor actually recommended two paths: communication or geography, subjects in which she took multiple classes at COD.

“I met with another counselor specifically for the Geography Department, and all of the classes I took at COD fit beautifully into the route for a Geography Teacher Education major,” she said.

Hamilton earned her bachelor’s degree at the end of 2020 and currently works as a Social Studies instructional assistant at Mundelein High School. She continues to look for a full-time teaching position and would like to continue her education in linguistics, with a possible goal of becoming an international teacher.

As for COD, Hamilton considers it the best choice she could have made.

“Getting the freedom to choose what classes I wanted to take was really liberating,” she said. “COD has such a huge range of classes with subjects I’ve never taken before, so it was a great way to get outside my comfort zone and explore—plus they ended up transferring to a career choice that I love.

“My advice to other students is to take whatever classes you love because there is no wrong path. Don’t stress over classes you aren’t interested in and take what you want to. And go see your professors during office hours, even if it is just to chat it up!”

More about the Geography program at College of DuPage