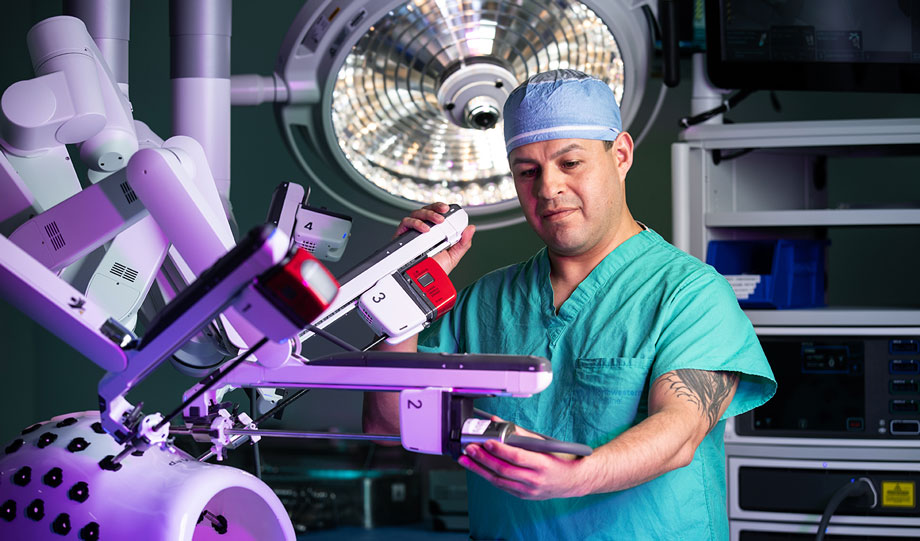 Victor Barrón understands the obstacles his patients face when they arrive in the operating room.

As coordinator of Northwestern Medicine Delnor Hospital’s da Vinci Xi® Surgical System, the College of DuPage alumnus overcame his own obstacles in order to reach success. His family moved from Mexico to the United States when he was 14 years old in hopes of finding greater opportunity and an overall better life. However, Barrón had trouble adjusting to his new environment.

“It was a very rough transition for me,” he said. “I didn’t know the language or culture very well. I experienced a lot of bullying. The resources were also very limited for the Hispanic community at the time, so there were not many stores, restaurants or even hospitals for people who did not speak English. Thankfully, we survived.”

Barrón graduated from West Chicago Community High School in 1995 and enrolled in COD’s Hospitality and Tourism program with plans to pursue a career in hotel management. A first-generation college student, he struggled academically due to a lack of knowledge of the curriculum and GPA system. Feeling discouraged, he decided to drop out.

At the time, he held a job as a surgical aide at Northwestern Medicine Central DuPage Hospital, primarily assisting the nurses and surgical staff in cleaning rooms and caring for patients. Barrón eventually became interested in the work performed in the operating room (OR) but wasn’t sure how to take the next step.

“I was always asking questions to learn more about it. I started seeing the work done by people in different roles in the OR, including doctors, nurses, surgical techs and everything in between. That’s when I really began to develop a passion for the OR and knew that I wanted to make a career there.”

In 1999, Barrón began working as an anesthesia technologist at Delnor, where his colleagues and mentors encouraged him to go back to college. Six years after dropping out, he set his sights on returning to COD and entering the Surgical Technology program.

“This time, I had no doubt that COD was the best choice to help me achieve my goals,” he said. “I was focused on fixing my GPA in order to get into the Surgical Technology program and earn an associate degree.”

I always felt like I had people to lean on for help. I left COD feeling like I was well-prepared for a fulfilling career.

A new father with a full-time job, Barrón had concerns about whether he could maintain such a busy schedule while adding school to the mix. He met with a counselor who provided guidance in setting an academic path that worked for him. He also spoke with Kathy Cabai, Professor of Anesthesia Technology who, at that time, was Professor of Surgical Technology, with whom he previously had worked.

“Kathy is not only a very knowledgeable and professional person but also a great friend,” he said. “During the program, I was working full time but thanks to her advice and encouragement, I was able to succeed.”

Barrón’s second experience at COD turned out to be much more successful than his first.

“The program was very challenging but rewarding,” he said. “I always felt like I had people to lean on for help. I left COD feeling like I was well-prepared for a fulfilling career.”

“Becoming a Certified Surgical First Assistant (CSFA) and coordinator of the da Vinci system were big things for me because I became very involved in the training of surgeons, surgical assistants and other surgical techs on how to use the system during operations,” he said. “I’ve also been able to help other Northwestern Medicine hospitals, such as Central DuPage and Kishwaukee. It is a blessing to have a positive impact on my colleagues.”

Barrón’s career success comes as no surprise to Cabai.

“He is passionate not only about his field and career but also extremely passionate about the patient on the operating room table,” she said. “His desire to become the best, strive for perfection and perform excellence is what made him a successful student and now a great CSFA.”

Throughout his career, Barrón also participated in a variety of mission trips. He fondly recalls the work he did with Mexican Medical Ministries, a nonprofit organization dedicated to providing low- or no-cost health care to the people of Mexico. He joined a group of 10 to 15 members who traveled several times a year to Mexico to Palenque, Chiapas, with the goal of performing 30 successful surgeries in a week.

“We worked from sunup to sundown. Even though the days were tiring, just to see the faces of the people we served was more than enough to make me happy.”

Barrón has now worked at Delnor for more than 20 years. While he would like to continue doing surgeries for the foreseeable future, his plans include teaching. Some of the most meaningful moments of his career so far have come when helping the next generation of professionals in his industry. He enjoys being part of a team that gives presentations to local high school students, and he invites COD’s Surgical Technology students to attend the surgical robotic in-service sessions when training new staff.

“I like to share my knowledge,” he said.  “My ideal goal once I retire is to teach in a surgical tech or surgical assistant program. I already try to be as involved as possible with the local schools to make sure Delnor has good representation, but I would like to become a teacher someday.”

He said that none of his success would be possible without the support of his wife, Maribel, and daughter, Annette. He credits his experience at COD with preparing him for a career in the operating room as well as empowering him to share his expertise to help others.

“College of DuPage is an excellent college and will help you achieve your goals,” he said. “Thanks to the career that I chose at COD, I have accomplished dreams that I thought I would never reach. I go to work to do the job that I love and I have also been able to go on mission trips to help others. What a blessing!”

Learn more about the Surgical Technology program at College of DuPage