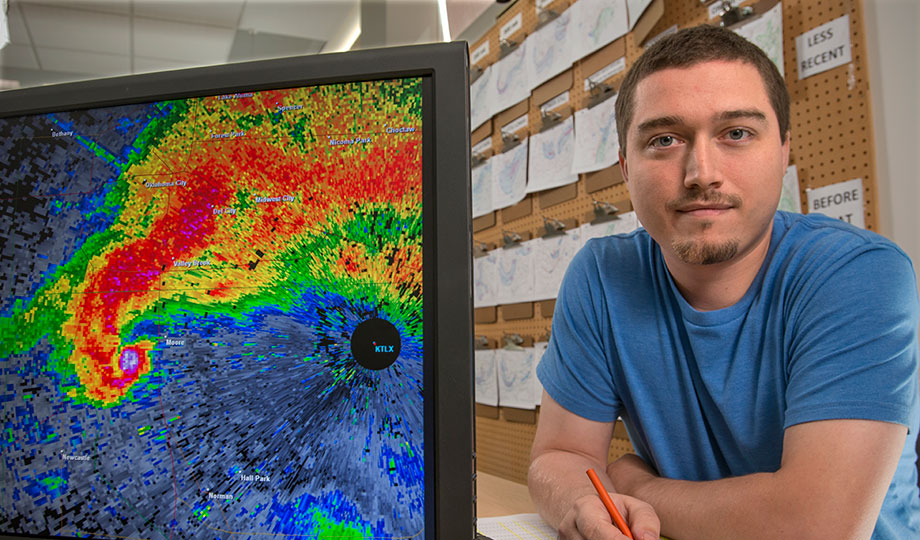 Mike Zuranski has never been to Burbank, but he holds an unusual claim to fame when it comes to the Southern California entertainment hub: He won a top spot in the national WxChallenge for accurately predicting the weather there for 10 days.

“There were a lot of colleges competing, really good programs with some really big names in the field, so we were really impressed with how well we did our first year,” he said.

Zuranski first began taking classes at College of DuPage in 2002, but it was an on-and-off venture. He enrolled in his first meteorology classes in 2008 and returned consistently.

Next Generation Weather Lab at COD

“I’ve just always had an interest in thunderstorms and the weather. I figured that even if I never did anything with the classes, I’d always appreciate the knowledge and education,” he said. “When I was considering COD’s Meteorology program, I met with Professor Paul Sirvatka. One of the first things he said was that this is the best school in the country to start your educational career in meteorology. After that first semester, I could tell it really was a great place to go for the subject, and now I completely agree with him that this is the best place to get started.

“There are a number of ways in which Paul and many others help you network with professionals in meteorology and related fields. Our student chapter of the American Meteorological Society brings in speakers and allows students to gain insight and exposure to various career opportunities. We also relay internship opportunities offered by other companies to students. For example, several current and former students have had an internship at WGN.”

Our student chapter of the American Meteorological Society brings in speakers and allows students to gain insight and exposure to various career opportunities.

Having earned his Associate in Science degree and the Weather Hazards and Preparedness certificate, Zuranski worked as a certified weather observer for Midway Airport and for many years as the meteorology support analyst at COD. He also continued his winning ways regarding the WxChallenge, placing in the annual competition eight times, including third place in the faculty/staff category in 2020.

Zuranski is currently a data engineer for Unidata, which had previously bestowed upon him the Russell L. DeSouza Award for his work enabling the Unidata Program to better serve the geosciences. His work is similar to what he did at COD, just on a different scale.

He urges students to check out COD and to connect with faculty, staff and students.

“Whether it’s meteorology, automotive or anything, study with them, converse with them and just spend time with them on campus or off,” Zuranski said. “Not only will you make new friends, but you also will learn so much more than you would from the classes alone. It can also significantly improve your networking opportunities, which I can’t over-emphasize how important networking is.”

Learn more about the Meteorology program at College of DuPage