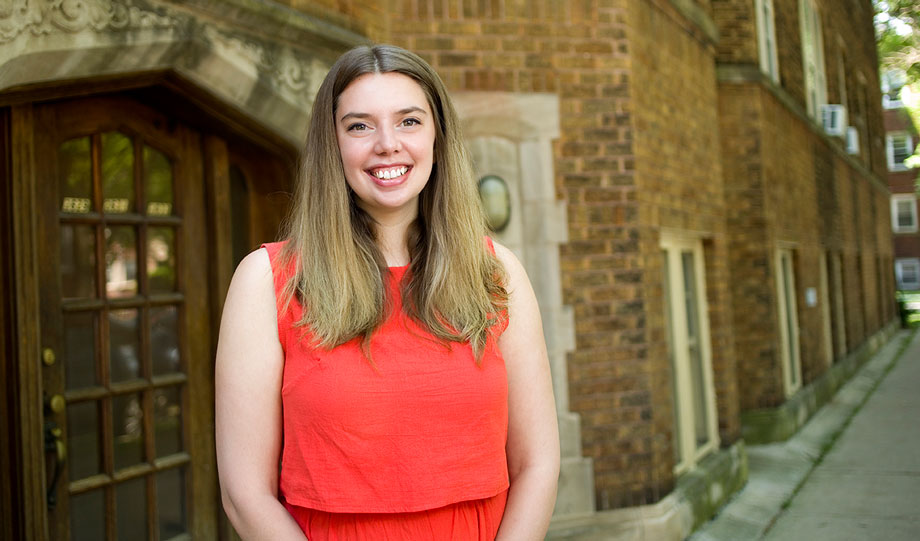 Allison Schraub readily admits to being a subpar student who was teased by schoolmates in middle and high schools.

By 17, she was working 35 hours a week as a waitress while attending high school. Dreams of college were pushed to the back of her mind as she helped support her disabled parents – a mother who, after back surgery, was reduced to a wheelchair, and a father who has endured eight heart attacks, a quadruple bypass surgery and a dozen angioplasties.

But Schraub is amazed by her own transformation. She became an Honors student, president of the Student Leadership Council (SLC) and applied to such schools as Northwestern and DePaul in order to pursue a career in politics.

And College of DuPage, the only school that she felt would accept her, turned out to be the best decision she ever made.

Schraub was one of those kids. She would miss school just to avoid the teasing and insults hurled by classmates.

“They never knew me,” she said. “They never knew that while they were shopping at the mall, I was helping my mom cook dinner, and while their dad was home on the weekends, my dad was working 14 hour days.”

But she believed in herself. And despite being nervous, Schraub decided to give a semester at COD a try. The result was life-changing: For the first time, she earned straight A’s.

“Unlike in high school, I was taking classes in subjects I was interested in and was being challenged every day,” she said. “I knew it was a great opportunity for a second chance and to achieve any goal that I would set for myself.”

An invitation to join the Honors program followed that first semester. Wondering whether she was smart enough to do so, Schraub was convinced by Andi Liedtke in the Honors program office that the students who are unsure of joining the program are the ones who succeed the most.

Still, despite loving her studies, she needed to work. During her second year at COD, Schraub picked up a second job in the College’s Academic Affairs office. Overall, she worked 50 to 60 hours a week to make sure her parents wouldn’t have to worry. Two older brothers, Vince and Tim, both college graduates, encouraged and supported her in any way possible.

And yet she still craved more from her college experience. Inquiring about Phi Theta Kappa, the student honor society, and the SLC, Schraub became the coordinator of Operations for SLC and then was elected president, unleashing a newfound passion: politics.

“I have always been a strong believer that anyone can change the world,” she said. “I believe that with politics, you can achieve that. You can lead in trying times and persevere to achieve the impossible.”

After graduating from College of DuPage with an Associate in Arts degree, Schraub transferred to DePaul University to major in political science. She also is heavily involved with the Democratic Women of DuPage County, formerly serving as chair of the Young Democratic Women Committee and was elected Precinct Committeemen.

Schraub earned her bachelor’s degree in Political Science and a Leadership Certificate. Right after graduation, she took a job at The Sierra Club as a Conservation Organizer, where she helped organize volunteers around conservation issues in Illinois and helped work on environmental policy in Springfield. She then worked as Regional Field Director for U.S. Senator Dick Durbin’s campaign and then as Deputy Field Director for Rahm Emanuel’s re-election as mayor of Chicago.

Most recently she was the Deputy Campaign Manager at Airbnb and was a co-organizer of the Illinois Resistance Resource Fair, during which 500 people connected with 50 national and local organizations looking for volunteers. Attendees also took part in training breakouts.

Schraub hopes that whatever she does, she can have an impact on younger generations.

“My mission in life is to help those little girls who have no confidence in themselves realize their own true beauty and potential,” she said. “And who knows, maybe one day I will be the first female president of the United States.”

More about the Political Science program