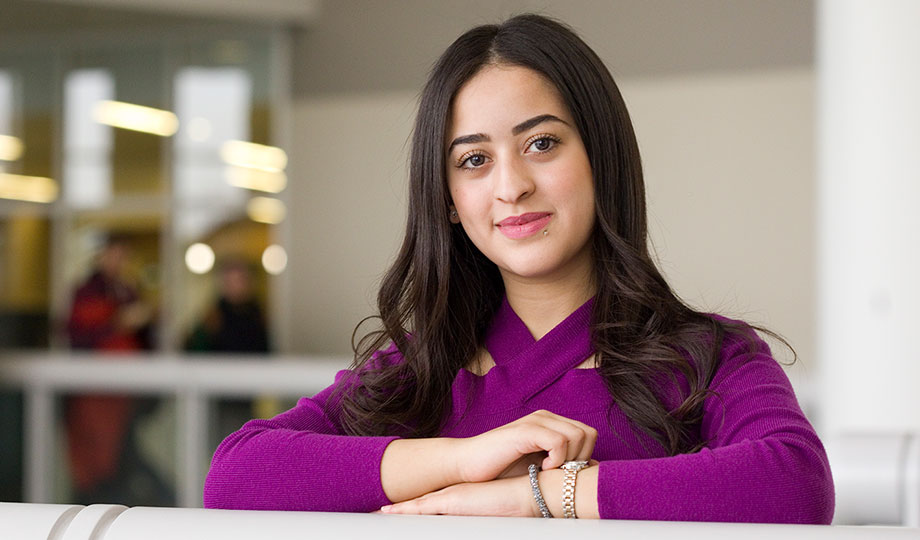 The more Danya Nasar read about cybercriminals discovering new ways to attack and what losses they cause, the more she liked the idea of studying cyber defense.

But when it came time to enroll in college, Nasr – who grew up in Saudi Arabia and Palestine and is now in the U.S. with her sister – had a difficult time.

“I live in a country of which I’m not a citizen, so when I wanted to register, they didn’t give me a chance to show why I’d do great. They just told me that priority was for citizens or they won’t give scholarships to non-citizens, so I had to skip my first semester of college,” she said.

A friend was studying at College of DuPage, so Nasr researched the school and discovered how highly ranked it was among institutions in the state. She also was amazed by the number of different majors offered and the partnership with other universities

“I’m gaining knowledge, skills and experience at COD that will help me in both career and life in general. In addition, gaining skills in communication and problem solving helped in boosting my confidence,” she said.

While at COD, Nasr earned the Rev. Dr. Martin Luther King Jr. Scholarship from the College of DuPage Foundation.

“Dr. King believed all men are created equal and should enjoy the same rights and privileges, and I found this in COD in terms of education and treatment,” she said. “I’m really thankful and appreciative for being selected as the recipient of the MLK scholarship, which will help me focus more on my studies since my burden is lightened. I won’t need as many part-time jobs and it might help me graduate earlier.”

Nasr plans to pursue a master’s degree and then gain as much experience as possible.

“I don’t want to be considered as just another graduate of this field,” she said. “My goal is to make a change in countries’ vulnerability against cyber-attacks.”

As for COD, Nasr said the school takes note of the hard workers and talented students.

“COD actually discovers them and pushes them forward in doing even better,” she said. “You’ll find people at COD who will really appreciate what you’re doing.”

More about the Computer and Information Technology program