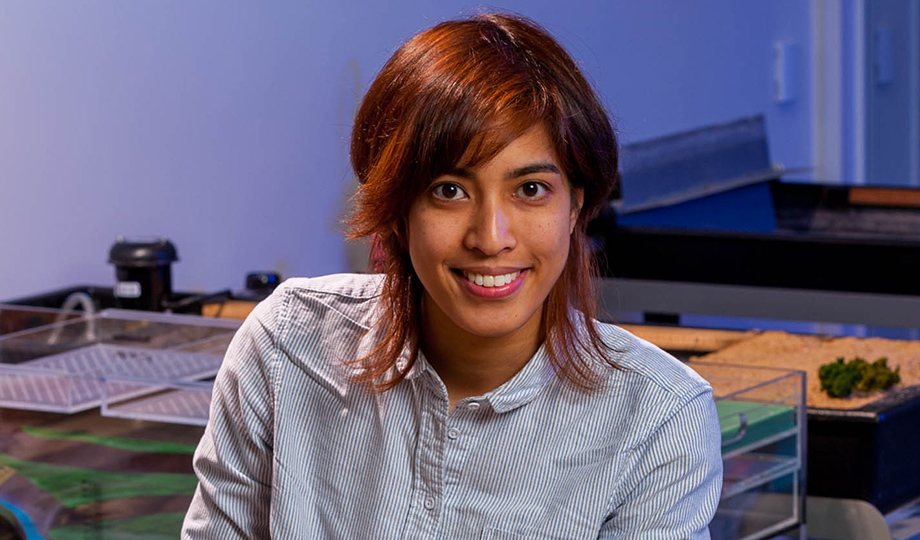 For as long as she can remember, Julianne Fernandez was always curious about the environment and how things worked.

“Creating anything with my hands came with ease,” she said. “During elementary school, I became fully immersed in art class. As new art projects complemented my creativity in middle school, I realized the great detail of this planet, from galaxies to the deep trenches of the ocean. Learning to apply my creativity through a camera in high school granted me the ability to capture what I saw to be extraordinary. But focusing on the physical appearance of nature left me looking for a challenge.”

Barely passing high school, Fernandez didn’t have many options for college and wasn’t sure what her future goals were. So she chose College of DuPage as it was close to home and affordable.

For a time, she was on academic probation and was forced to take the College Success Skills class, which really helped her sort out her priorities.

“Many of the COD professors I had in my math and science classes were very passionate about their subjects, which made me want to engage in the material,” she said. “The vast number of different subjects offered at COD allowed me to explore a huge range of them. This is how I explored and discovered my interests, from art to oceanography and environmental sciences.

“When ethnobotany took a hold of me, I gained the knowledge of different plant life, various cultural uses, and the impact a plant has on world economy. Oceanography revealed fascinating processes hidden in earth’s oceans, winds and atmosphere. Finding an interest in the sciences and gaining a reason to appreciate education is responsible for my academic success.”

Fernandez earned her Associate in Arts degree at College of DuPage and decided to pursue a bachelor’s in oceanography, as it combined her interests in math, physics and earth science. With access to the ocean limited in the Midwest, she enrolled at Humboldt State University in California, where she participated in academic programs such as the Indian Natural Resource, Science and Engineering Program; the National Science Foundation Louis Stoke Alliance for Minority Participation program (LSAMP); and the Society for the Advancement of Chicanos and Native Americans in the Sciences (SACNAS).

Starting her Master of Science in Geology at the University of Cincinnati, Fernandez focused on carbon cycling and methane emissions in Lake Erie. She embarked on her first research cruise of Lake Erie in August 2015 and completed an internship at the U.S. Army Corps of Engineering in Rock Island, working as a physical science technician within the hydrology and water quality section.

In 2016, she was selected for a two-week National Science Foundation expedition for early career marine scientists to learn about research using submarines. As part of this project, she was trained using Alvin, a deep submergence vehicle (DSV) owned by the U.S. Navy and operated by the Woods Hole Oceanographic Institution in Woods Hole, Mass. The famed vehicle, first deployed in 1964, has been used for a variety of research projects and special missions, including a 1986 exploration of the Titanic wreckage.

Fernandez and her team were researching the amount of methane in Atlantic seeps to determine whether levels are acceptable, which meant gathering water samples at many depths. She spent her first week on land and the second on a ship. Only a certain number of scientists were chosen to dive in Alvin, and she was one of the select few, diving more than two-thirds of a mile into the ocean.

“Diving in Alvin was amazing,” she said. “It’s the size of a two-door car, with three front windows, one on the port side and one on starboard. It contains computers, oxygen tanks, cameras and other research equipment. While it was compact, it was also comfortable.

“We began to sink slowly, and the light starts to disappear gradually as the temperature gets colder. Once the light is gone, you see all of the organisms light up. It’s as if there are more animals in the water than water itself. The whole time we descended, the water column we were studying was glowing, like fireflies but more concentrated and fluid. It was like something out of a fairy tale.”

Fernandez has scuba-dived before but had never been in a submarine. She said the hard part was remembering the research that needed to be done.

“It was like a whole new environment, an unlimited one that goes on forever,” she said. “I saw so many creatures, such as a giant sea urchin that looked like a porcupine and crossed the arms of Alvin. It seemed like I was down there for only 20 minutes.”

Fernandez’s dive lasted four hours and was a successful mission, as she was able to collect water samples, rocks and sediment.

Everything I’m doing now I first learned about at College of DuPage.

Having received her master’s, she is finishing her Ph.D. at the Royal Holloway, University of London, in the Department of Earth Science, where she is examining isotopic signatures of urban methane from London. The goal is to gain a better understanding of urban methane that will benefit future government policy regulating emissions, and the research contributes to both European Union and United Nations initiatives. She then will start a postdoc position in the Department of Geology at the University of Maryland.

She has been the co-author on several published papers and in December 2020, her master’s research on methane and nitrous oxide was in the Journal of Great Lakes Research—her first publication as first author.

College of DuPage provided Fernandez with a sound foundation, and she believes it is a great place to explore interests that could then lead to a fulfilling career.

“The courses are well-developed and the professors are just as good as at a four-year college,” she said. “The Earth Science courses have great resources and are very hands-on. When I took oceanography, I thought it was fun when I got to create sand beaches in storage bins, like the ones someone would keep under their bed, and used spatulas to observe the effects waves have on a coast. But now, I can only imagine how exciting it is to use the huge custom-made wave tank to see these same concepts.

“When I was at COD, I never thought I’d reach this point. I just followed what interested me. I was studying with Professor Diana Strode and didn’t think that one day I would be at grad school in a STEM field. But everything I’m doing now I first learned about at College of DuPage.”

Learn more about the Earth Sciences program at College of DuPage