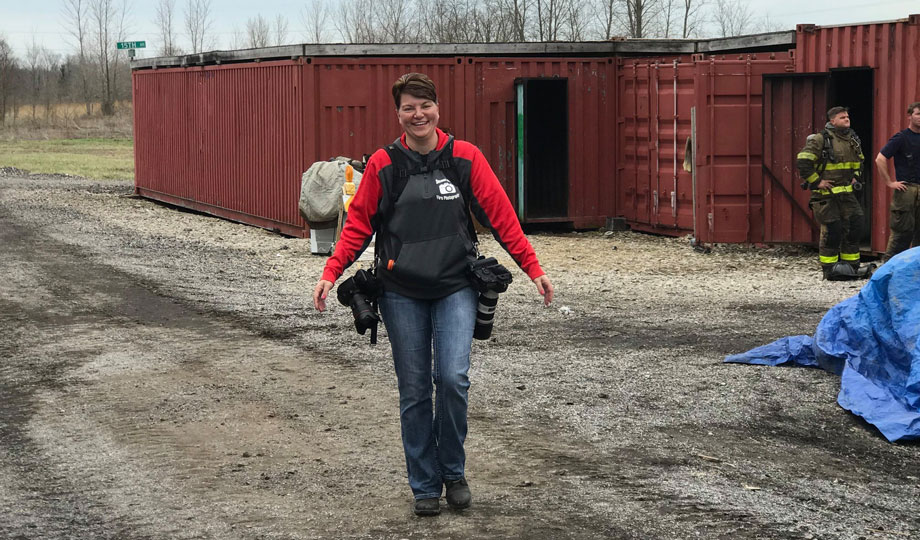 Growing up, Johna Denault spent hours on her homework due to her dyslexia. To find an escape from the stress, she turned to photography.

“When I was 12, I started taking photos with my parents’ Polaroid camera,” she said. “I took photos of nature and really enjoyed taking action shots. From then on, I knew I wanted to explore photography as a career.”

As an adult, she enrolled in photography classes at College of DuPage.

I was told for years that photography was just going to be my hobby, but it has turned into such a fulfilling and unique career.

“I knew my limitations and strengths, so instead of earning a degree, which would involve a lot of reading, I took every photography class COD offered to hone my skills,” Denault said.

Receiving high accolades from her COD professors, Denault was determined to turn her passion into a career. She began taking portraits of firefighters in her local community, which eventually led her to a somewhat unconventional career as a fire photographer.

“The fire chief posted my portraits to social media, and I wasn’t happy with how they turned out because it wasn’t showing the firemen doing their craft,” she said. “Firefighters save lives every day and I really wanted to capture that.”

Through research and workshops, Denault sharpened her skills and learned how to take photos in high dynamic range. In 2015, she launched Second Alarm Fire Photography. She travels around the nation taking pictures for local fire departments and has been the photographer for the Fire Department Training Network for the past four years.

“Photographing fire scenes can be tricky and at times dangerous, and while I can’t change that—nor would I want to—I know I’m creating one-of-a-kind photos,” she said.

For Denault, the key to capturing such dynamic pictures is making sure you are agile on scene.

“You only have a split second to get each shot and fires are unpredictable,” she said. “You have to be willing to be in the moment and get creative while staying safe. It’s like a wedding. You miss a shot and it’s gone forever.”

Despite capturing fire photos for more than a decade, Denault said her adrenaline is still high on scene.

“There was one barn fire that I had heard on my pager while out shopping,” she said. “I wasn’t prepared, as I had white canvas shoes on and no professional gear with me other than my camera. When I got back to my car, I looked like a black mud pile, but I got incredible shots that day. You have to be willing to get dirty, quite literally, to get a good shot.”

Once Denault photographs a fire, she sends the photos to the fire department for personal use or, if it’s an arson, she sends them to local investigators to help with their investigation. After a few years on the job, she realized that public information officers were in high demand, so she became certified to assist with press releases on scene.

“I was told for years that photography was just going to be my hobby, but it has turned into such a fulfilling and unique career,” she said. “I will always be grateful to my COD professors who championed for me and told me I had a gift.”

More about the Photography program at College of DuPage