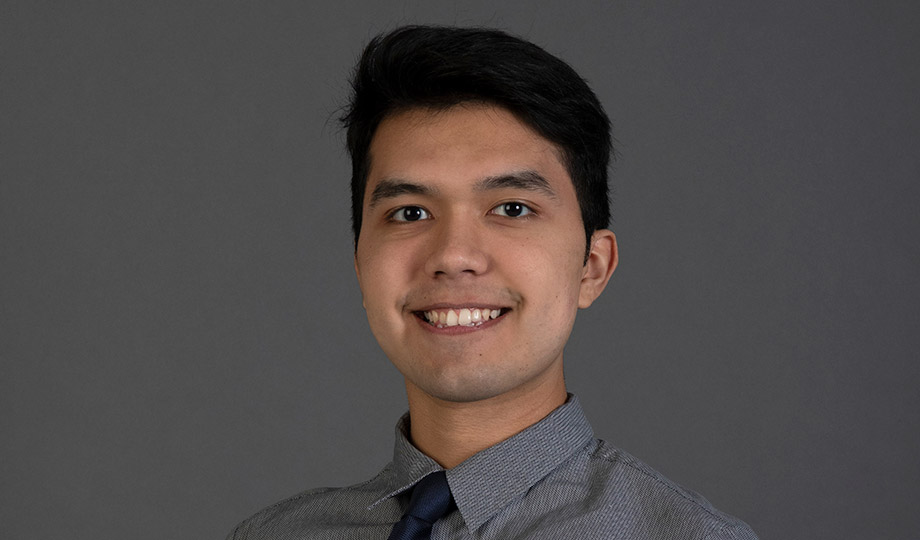 Oscar Almonte has been fascinated by biology and molecular biology since he was a child.

“The world of science was ever-so-satisfying and full of awe and wonder,” he said. “It just made sense and I always excelled at it. That admiration and adoration, paired with the hope of one day utilizing my knowledge of biological sciences to help people in the medical field, is what kept me going toward that major.”

When it came time for college, he originally did not want to attend College of DuPage.

“Growing up, there was a stigma surrounding going to a community college, as if that meant you weren’t qualified enough or smart enough to attend another academic institution,” he said. “Rationally, I always knew none of that was true, but the thing about stigma is that it lingers and clouds the perceptions and attitudes about a subject.

“What originally got me to attend COD can’t be pinpointed to just one factor. The pandemic along with its online learning formats, my mental health’s enormous decline, and being the recipient of the incredibly generous Scholars Award were the three biggest factors that made me decide to go to COD. It was simply the best and most logical next step for me to take, and I can now say I couldn’t be happier nor more grateful about having attended such a fantastic institution.”

COD gave me the safety, assurance and confidence of knowing I can pursue whatever I am interested in.

Being named a Presidential Scholar, which covers two years of tuition as well as enrollment in the Honors Program and Phi Theta Kappa, allowed Almonte to focus on his studies. By the end of his freshman year, he discovered that his love of science gave way to another passion—romance language studies, especially Spanish and French.

“I quickly learned how my set of affinities in romance languages could be used for the benefit of people and society,” he said. “What heightened my interest in Spanish and French were my native Spanish-speaker roots and sense of pride in my culture and cultural identity, along with studying the French language all four years of high school and falling in love with it.

“I learned that I shouldn’t devalue such a priceless set of skills and knowledge just because they weren’t what I originally hoped to do. They are just as complicated, intricate and essential as many other skills and fields. After all, how many people can confidently say they’re not only fluent but also proficient as a bilingual, trilingual or even polyglot speaker?”

As an Honors Scholar, Almonte proved to himself that he could successfully meet the academic rigors of the Honors Program, which helped him expand his horizons and future growth as an academic. He also was a member of Alpha Mu Gamma, the honor society for language studies, as well as numerous clubs and organizations.

In earning both the Associate in Arts and Associate in Science degrees, Almonte graduated with high honors. He also received the full-tuition Millikin University Honors Program Transfer Scholarship, which means he will have little to no college debt once he completes his bachelor’s degree.

“Both scholarships I received are a dream come true, especially for a family of first-generation immigrants,” he said. “They not only help by gifting me the ability to focus on my studies so I can one day achieve the career I want, but also by lessening the immense burden my family has to carry, especially the grueling labor my parents put themselves through to give my siblings and I a better future.

“Thanks to the transfer scholarship, I’ll also be gifted the time and freedom to become a more involved and active student in clubs and other extracurriculars, which will only increase my chances of standing out, growing further and succeeding at Millikin. COD and Millikin have truly blessed me and my family.”

Although he is not certain about a specific career, Almonte can see himself as a diplomat, college language professor, translator or interpreter. He would like to continue his education and pursue a master’s degree in romance languages and perhaps a doctorate.

As for COD, he would tell prospective students to disregard any stigma associated with a community college education.

“COD allowed me to continue with both of my passions, which kept my options, opportunities and doors open for the future,” he said. “COD gave me the safety, assurance and confidence of knowing I can pursue whatever I am interested in, whether or not I change my mind again about potential career paths.

“I would like to thank COD, its professors, its counselors and its entire staff for making COD the amazing college it is. I would also like to thank my sisters, Evelyn and Yazmin, for being there when times got tough, and my parents who always selflessly choose to put their children first.”

Learn more about the Languages program at College of DuPage