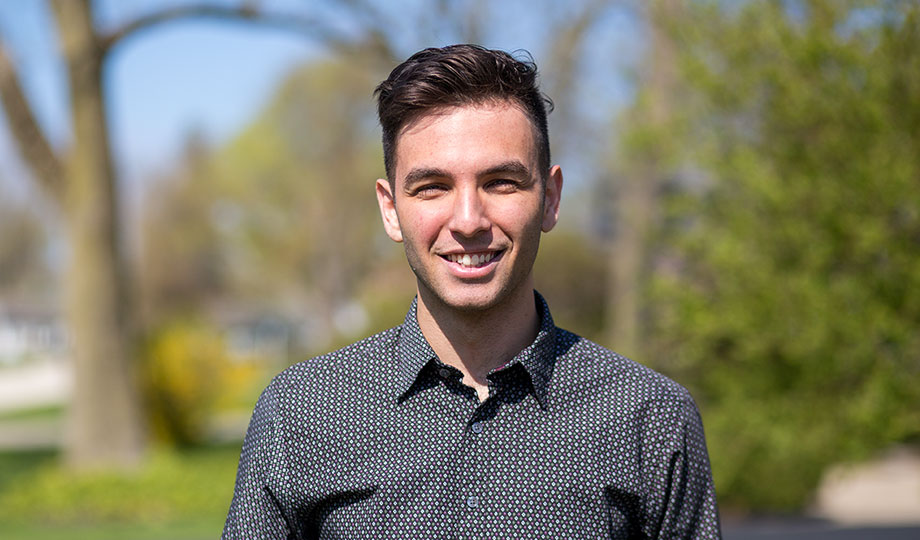 Blerim Abdullai’s interest in engineering came from his dad, a mechanical engineer.

“He taught me all about what engineers do and we worked together on some smaller projects around the house,” he said. “I also played computer games growing up which required me to learn a bit about computers, including how to build one. From there, I took some computer science classes toward the end of high school and that got me interested in working with Arduino (an open-source electronics platform), and it really snowballed from there.”

What drew Abdullai to College of DuPage was the small class sizes and the Engineering Pathways program, which offers guaranteed admission to qualifying students interested in transferring to The Grainger College of Engineering at the University of Illinois at Urbana-Champaign (UIUC).

“The idea that I would be able to save money and be guaranteed admission to the engineering school I wanted was very appealing,” he said. “I also never felt as if I would be getting an inferior education in any way. I believe that the rigor of the COD courses is on par with the equivalent counterpart at any another university.”

His passion for engineering was truly ignited by his experiences at COD, especially those with the Engineering and Technology Club—for which he would serve as president—and the Robotics Team.

“Being part of the club and Robotics Team required a lot of research and learning new things,” he said. “At a bigger university, there are dozens of juniors or seniors who are going to get their turn before younger students. At COD, I was able to pick projects that interested me and the club helped locate resources to make it happen. I also worked with some amazing people in order to complete projects that I am genuinely proud of. Our over-the-internet Sumo-bot project taught me so much about electronics, networking, web development, leadership and teamwork. This project is almost always asked about in every interview I have had and I really feel that it played a big role in helping me land my internship.”

The internship was through the U.S. Department of Energy at the prestigious Pacific Northwest National Laboratory in Washington in summer 2021. For 10 weeks, Abdullai worked with artificial intelligence and developed a machine-learning algorithm to provide insight into the interactions of 4G and 5G networks.

He credits COD for providing the skills that led to the opportunity.

“The experiences I gained talking and networking with professors, teachers and area professionals helped to prepare me for the application process and interview for the internship,” he said.

Having earned his Associate in Engineering Science degree and graduating with highest honors, Abdullai is transferring to UIUC to pursue a Bachelor of Science degree in Computer Engineering. He is still exploring various paths to take but would like to work with embedded systems, as he enjoyed programming all of the microcontrollers and computers during his time on the Robotics Team.

“It is just a matter of finding the application that I am the most passionate about,” he said. “I believe that COD and my summer internship are playing a key role in this process.”

“Do not underestimate the program and its difficulties. These classes are hard and they transfer very well for a reason. It is important to make school your No. 1 priority in order to be successful within the program,” he said. “I would also strongly recommend staying on top of your coursework selection and making sure that you are getting through all of the classes required for your major in order to make as smooth of a transition as possible. You should also make it a goal to explore your interests, so I recommend getting involved with the engineering club and applying for internships as soon as possible.

“I would just like to thank Dr. Tom Carter, Nikita Lukhanin and Arijus Trakymas in particular, as without them we would not have been able to accomplish nearly as much as we did and I owe a lot of my success to those three. There is simply no way I would have become the president of the Engineering and Technology Club, be able to work out whatever projects I wanted, and to have the proper resources allocated to these projects without COD and the talented students and professors there. I’ve gained a lot of practical and technical experience at COD and I’m ready to apply those skills.”