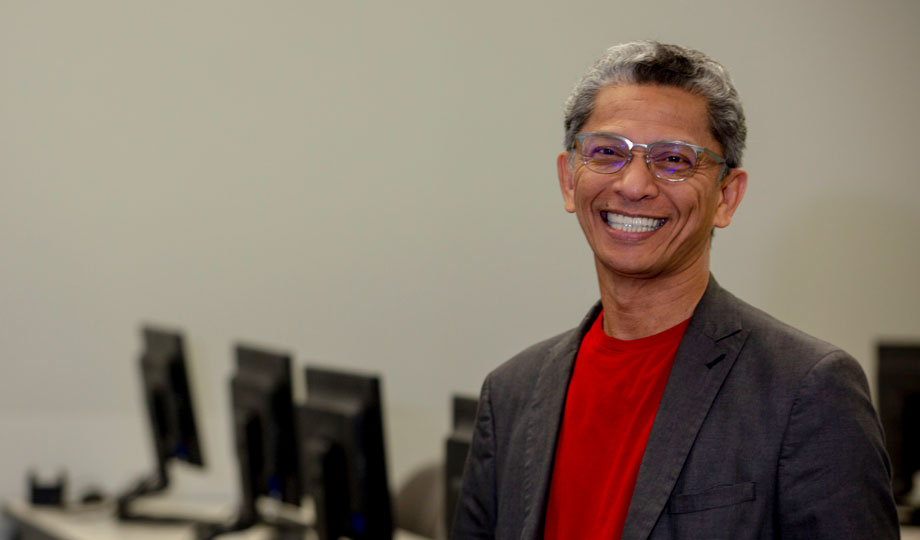 "I was curious to know what those rectangle holes punched randomly represented on the card. No one could explain it to me at that time and I really had no one to ask," he said. "I know the individual that possessed the card utilized it for writing his grocery list. This was in the late '60s and during that time computers were not what they are today. I only heard amazing stories about computers that were intelligent and could perform many complex calculations."

Shamsuddin's inquisitiveness became stronger. However, since no computer courses were available at that time, he began studying electronic and electrical engineering because it was the closest to computing. Ultimately he earned a master's degree in Computer Science and started his career with AT&T Bell Labs in Naperville as a software engineer and system administrator. Later, when the corporation was divided into three companies, he was reassigned to Lucent Technologies, which eventually joined with Alcatel and became Alcatel-Lucent.

He worked as a system and network administrator in Information Technology, which was one of many jobs he held in IT that included software developer, database administrator, Linux and Unix system administrator, and leading a networking team. Other responsibilities included supporting users and acting as a technical training instructor.

It was this latter role that Shamsuddin savored. Before joining AT&T, he was a director in the Computer Science department at Midstate College in Peoria, and while at AT&T he began teaching part-time at College of DuPage.

"I enjoy teaching and the academic environment, and I have a passion for teaching," he said. "It gives me gratification when I see the successes and achievements of students I once taught. Teaching, to me, means sharing, interacting and exchanging knowledge with students. I learn many things from students as well. Teaching empowers me to continue learning. Some studies suggest that people can maintain their cognitive abilities through mental exercise, and teaching involves mental exercise and mental stimulation."

His inspiration comes from a man whose intellect is still celebrated today, although Shamsuddin was fascinated by other aspects his persona.

"As strange as it sounds, I’ve always been inspired by Albert Einstein, and his mustache, crazy hair and white lab coat have always intrigued me," he said. "There's something about his teaching and quest for knowledge: E=MC2.

"When I was a graduate student at Bradley University and was a student Technical Assistant, I was assigned to teach a computer programming class using BASIC Language. To my surprise, there was an 87-year-old man, a physicist, in my class. His name was Dr. Ernst Ising. This was the man who invented the Ising Model, which is a mathematical model of ferromagnetism in statistical mechanics. The model consists of discrete variables that present magnetic dipole moments of atomic spins that can be in one of two states (+1 or -1).

"Dr. Ising once held the same job post that Dr. Einstein held and was a retired Physics professor at Bradley University. He died at his home in Peoria in 1998, one day after his 98th birthday. This accomplished man, who in a quest for more knowledge, humbly attended my course and enhanced my inspiration to become a professor one day in an academic institution.

"So I want students to be mindful that attitudes make a difference in whatever you do. If you think you can accomplish something, you have a chance at success. Live and learn!"