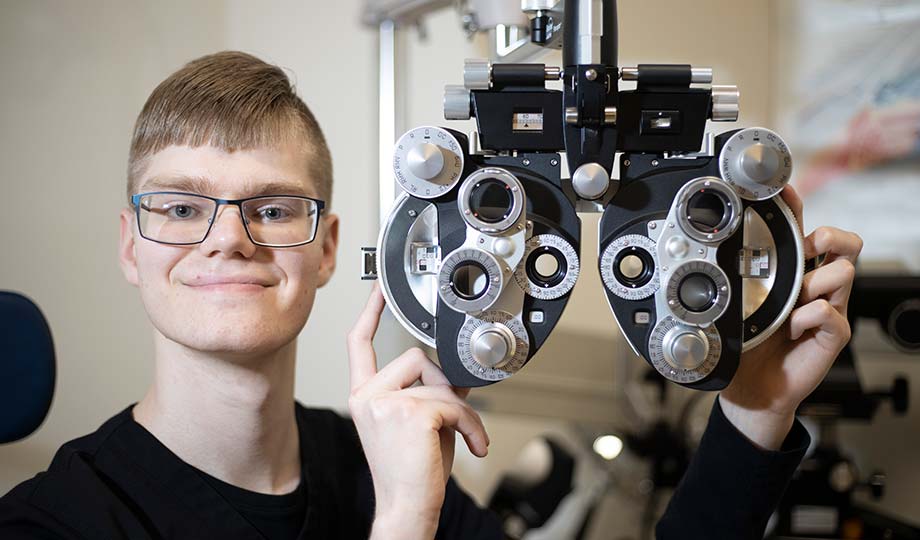 Nathan Verrips has a passion for helping people and considered becoming a doctor.

But he did not feel comfortable having people’s lives in his hands. The summer after his senior year of high school, he had an appointment that pointed him toward another career path.

“When I went to my optometrist for my annual eye exam, I realized that I would love his job—he has regular hours, he has fulfilling work and he is virtually never in a position where his direct actions are responsible for a patient’s life,” he said. “The field of optometry seemed like the perfect decision for me. It is truly fulfilling to enhance a person’s quality of life.”

He intended to get his bachelor’s degree and go to optometry school. However, Verrips had been homeschooled for much of his education, and his parents—who moved to the U.S. in 2016—did not understand the American college system.

Instead, he turned to College of DuPage. It was a fiscally responsible choice and allowed him to start slowly, taking just a few classes until he felt ready for a full course load.

“I looked into COD after hearing wonderful reviews about it from a friend who immigrated to the U.S. and entered one of COD’s 3+1 programs,” he said. “I attended the College’s Open House and was impressed by how many faculty members were so passionate about teaching students. I especially enjoyed meeting Professor Mitzi Thomas and learning about the Eye Care Assistant and Ophthalmic Technician programs. COD had affordable tuition, a great reputation, passionate teachers and many invaluable resources—all of which made it an incredibly easy decision to attend.”

To pursue his dream of becoming an optometrist, Verrips started with COD’s Eye Care Assistant certificate, which prepared him to become a certified ophthalmic assistant. He then will continue to earn the Ophthalmic Technician Associate in Applied Science degree.

COD had affordable tuition, a great reputation, passionate teachers and many invaluable resources—all of which made it an incredibly easy decision to attend.

“COD has been instrumental in helping me figure out the best path for my career,” he said. “With my clinical rotations, I got an advanced view of what the eye care field is like as a whole, all while effectively pursuing my associate degree,” he said. “While I do not doubt I would have succeeded academically if I went straight to optometry, the wisdom and advice from all my professors and advisors helped me discover the path that works best for me.”

Verrips also became part of the Honors program. Initially he did not think it was an option, but during his third semester, he began enrolling in a few Honors courses. While taking Honors English 1102, the president of the Honors Student Advisory Committee (HSAC) gave a brief announcement in class and invited students to join, which Verrips did. He became active in the program as the social media outreach officer and running the Discord server. He also became the first student in the Eye Care Assistant program to complete an Honors contract, which lets students earn honors credit for non-honors courses, such as those in specialized fields.

After completing his associate degree, which he will do while living in South Carolina, Verrips plans to gain experience before continuing to his bachelor’s degree and optometry school. His goal is to work in a clinic or own a private practice, although he could be swayed to become an ophthalmologist or an educator.

Verrips is happy that he chose COD to begin his college career.

“On a personal level, I am originally from South Africa. I have moved around all my life, living in Zimbabwe, the United Arab Emirates, Qatar and now the United States. I spent most of my life growing up in the Middle East and am very much a ‘third culture kid.’ COD has been such an amazing transition for me into college and professional life. I had not been in any brick-and-mortar school setting since grade 4; while I did not feel I had any difficulties with social skills in general, I did not have much experience in large group settings with people I did not know and did not think of myself as a particularly noteworthy student. I am so thankful to the many individuals throughout COD, students and faculty alike, for being quick to show me my own potential as a leader academically and socially. I feel much more confident in myself as a leader now than before I arrived at COD.”

Learn more about the Ophthalmic Technician program at College of DuPage
©