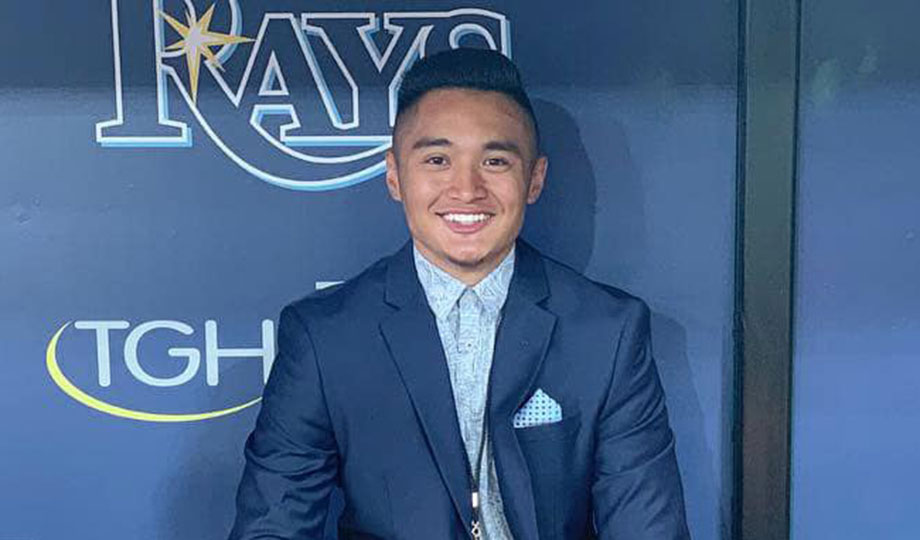 Josh Tolentino found a career that combines his love of sports and his desire to tell stories.

He mainly played basketball and soccer while growing up. In high school, Tolentino worked on the yearbook and student newspaper, where he first learned how to speak with athletes.

He built on that experience after enrolling at College of DuPage, where he knew he could develop a strong educational base while saving money.

“I knew I wanted to become a journalist and a storyteller, so one of the first things I did was join the Courier student newspaper,” he said. “At the Courier, journalism was taught and unraveled. I loved being inside the newsroom.”

Tolentino became the sports editor and covered all of the College’s team sports, both men’s and women’s.

“I learned a lot from my peers on the news side from chasing journalism and reporting, and Professor Cathy Stablein had a big influence on me,” he said.

After two years at COD, Tolentino transferred to Illinois State University and became the sports editor for its student newspaper. The Vidette. Responsibilities included covering all games and designing the newspaper, skills he honed while at COD. He also enjoyed an internship at the Chicago Sun-Times the year the Chicago Cubs won the World Series and had the opportunity to cover games.

“When I was in school, both at COD and at ISU, all I cared about was the paper,” he said. “I wanted to be at the soccer game and the basketball game, and then be in the newsroom typing the story and designing the pages. I remember having a sleeping bag at the Courier. I was invested in doing the best job because I cared so much about the work.”

Having earned bachelor’s degrees in both Journalism and English, Tolentino initially worked at the Kansas City Star as an intern, where he met Patrick Mahomes, quarterback of the Kansas City Chiefs, and developed a professional relationship with him. Tolentino then worked at the Daily Chronicle in DeKalb, where his main responsibility was covering Northern Illinois University, including college football, which allowed him to fine-tune his sports reporting skills.

He next spent three years at The Athletic, a subscription-based website that follows sports on both local and national levels. Although this required him to move around, Tolentino gained invaluable experience while writing about the Green Bay Packers, the Tampa Bay Rays and the Miami Dolphins.

Currently, he works for the Philadelphia Enquirer and covers the Philadelphia Eagles. His goal is to continue working as a beat writer and establishing himself as a sports reporter, eventually becoming an NFL reporter for the league at large.

“I’m just grateful for all of the opportunities,” he said. “It’s a unique job and definitely not nine to five. I have called the press box my work space and the field my office. I put in my all, each and every day, and yet it doesn’t feel like work.”

Tolentino appreciates what he learned at COD, which set him up to further his education and start his career.

“All of the things I do now I did at COD,” he said. “COD prepared me well. I covered every sport, I curated pages and I practiced journalism across campus. I was so invested in wanting to make each issue the best issue of the paper. In reality, I was more invested in the newspapers at COD and ISU than I was in my classes, and the skills I learned transferred to my career when I finished school.”

Learn more about the Mass Communications program at College of DuPage