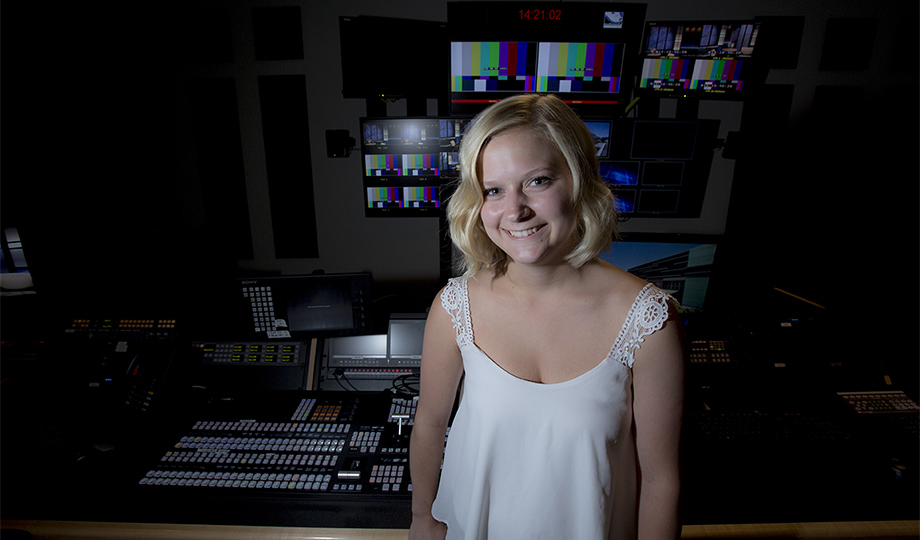 Sarah Taschetta majored in Motion Picture/Television. Watch the video above as Sarah talks about her career and the positive impact of College of DuPage.

After seeing other students’ videos, she initially saw herself as the school’s Ellen DeGeneres before developing her own voice. This included “minute to win it” videos, which became big hits, and segments promoting the school’s special needs population.

“I have always been aware of inclusion, and for the school’s TV show, I asked why we couldn’t have anchors who have special needs,” she said. “As a result, several were featured in this role. I also made a promotional video for the Special Olympics.”

When it came time for college, Taschetta initially decided to pursue occupational therapy at a four-year school.

“I went for 12 days and realized the regular college experience wasn’t for me,” she said. “I switched to College of DuPage and initially studied speech before I discovered the Motion Picture/Television program and Courier TV, the student-produced weekly news program. I took Professor Jennifer Piehl’s class and fell in love with directing.”

In 2018, she took part in the American Pavilion’s prestigious L.A. Intensive program. For nearly three decades, the American Pavilion has been the communications and hospitality hub at the Cannes Film Festival for American filmmakers. The organization offers an internship for students to work at the festival as well as a summer program in Los Angeles that provides information and resources to students interested in careers in the entertainment industry.

Taschetta has considered a career working behind-the-scenes as a director or producer for a TV talk show, and being hired for the Ellen DeGeneres show would be a dream come true. In fact, in 2017 her video submission was a finalist in Ellen’s 12 Days Skybox Challenge and shown on “Ellen” (pictured above is Ellen DeGeneres introducing Taschetta's video on the big screen).

“I’ve been watching Ellen since fourth or fifth grade,” said Taschetta. “She’s hilarious, but it’s also about how generous she is to those in need, which is why I’m a huge fan. Jeannie Klisiewicz, one of Ellen’s producers, was a fan who entered every contest, never won and eventually was hired for the show. I’m going to be persistent because it could happen to me.”

Taschetta transferred to Columbia College Chicago to pursue a degree in television production and directing. In 2018, she was nominated for the Crystal Pillar Student Achievement Award from the National Academy of Television Arts and Sciences, the producers of the Chicago/Midwest Emmy Awards. Her film, “Sam Anderson: In My Own Words,” shared the story of her friend and former Wheaton North classmate with Down syndrome.

In 2019, she was nominated a second time for the Crystal Pillar for her film, “Ross K. MacNeill and the Orange Jeep,” which shared the story of MacNeill, a Wheaton boy who lost his fight against brain cancer.

“The nominations alone exceeded any goals I could have set for myself going into college,” she said. “Walking away with the actual award is something I’m still trying to wrap my head around! This award just further confirmed something so many people knew, that Ross MacNeill’s story deserves to be told. I was simply lucky enough to be trusted by his family to tell a small part of it. I hope this brings more awareness to the Ross K. MacNeill Foundation because they do such amazing work regarding research for pediatric brain cancer.”

Taschetta also interned for the Ross K. MacNeill Foundation and promoted a raffle for an orange Jeep, which raised more than $360,000 for research.

Having graduated from Columbia, she worked at US99 as a digital content producer for its morning show and then as the social media coordinator for a beverage company. Taschetta is now pursuing her dream of running her own business, Little Red Balloon Stories, as well as an ecommerce store, The Little Red Balloon Shop.

“With Little Red Balloon Stories, I will continue to do freelance photography and videography, and for my store, I will do custom illustration requests from my customers’ favorite photos and then print them on some of the coolest products,” she said.

College of DuPage was the right choice for Taschetta. In addition to the affordable tuition, she was impressed by the quality of the resources and overall academic experience.

“It doesn’t matter that I didn’t start at COD,” she said. “I received an amazing education and the opportunities were just incredible.”