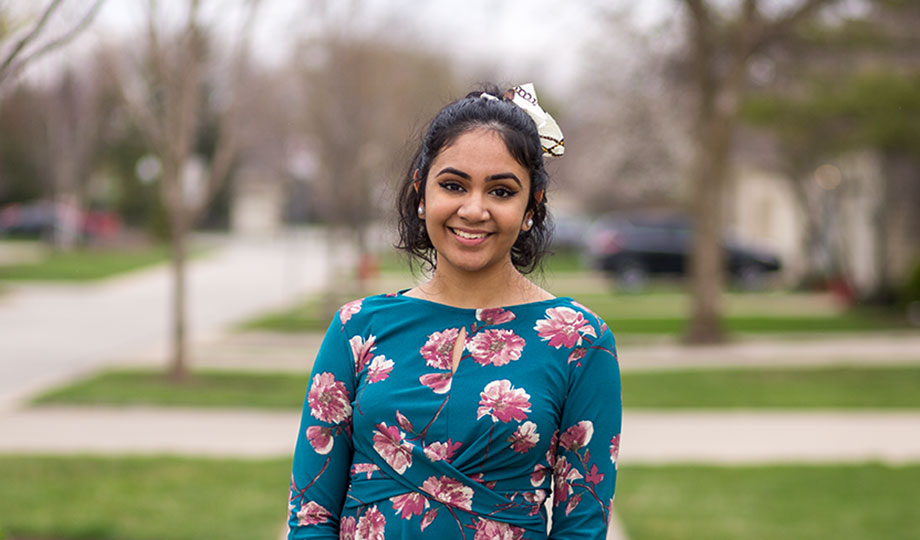 Srinidhi Subramanian enjoyed high school, which allowed her to dabble in different subjects, explore AP and honors courses, and engage in as many activities as possible.

But when graduation was approaching, she was unsure of what step to take next.

“While other students were choosing which universities to head off to, I felt stuck,” she said. “I had an idea of what major I wanted to pursue, and the idea of a four-year university was enticing, but none of it felt right for me. That’s when I decided to apply to College of DuPage.”

Subramanian also was named a Presidential Scholar, which covered two years of tuition for high-achieving students as well as enrollment in the Honors Program and Phi Theta Kappa. However, it took time before she discovered her own path.

“When I entered my first semester at COD, I was just as lost as before,” she said. “I looked around and saw so many different people, and I didn’t know where I was meant to fit in.”

During her second semester, Subramanian began working with the natural areas on campus as part of a service learning project, which made a positive impact on her.

“I not only got to learn about what COD had to offer, but I also was able to partake in the digital aspect of it. Especially when we transitioned to remote learning, I got experience with communicating to our audience via social media platforms and learned to meet our audience’s needs in a digital manner.”

This led her to the Graphic Design program, which offers an Interactive Media degree. It’s a career path that allows her to combine her love of art and technology. As an artist, she studies the Indian dance artform Bharatanatyam, while her interest in technology resulted in her launching a Tik Tok channel as a way to help students stay connected during the pandemic. Within one year, she attracted more than 500,000 followers.

“I began creating short comedic skits and commentaries daily, and the experience taught me about the importance of consistency, authenticity and creating valuable content for the audience,” she said. “I also didn’t have any South Asian role models, so I wanted to be that person for others.”

In addition, Subramanian immersed herself in various College activities. She joined the Page Turners, COD’s book club, as well as the Peer Mentoring Excellence program. During her Honors English course, she and a partner worked on a project that they later presented at the Honors Council of the Illinois Region Student Symposium. It was her first time presenting research, and she gained applicable skills to both the classroom and the real world.

Graduating with her Associate in Applied Science and doing so with highest honors, Subramanian was named one of the College’s Outstanding Graduate finalists. Her goal is to transfer and earn a bachelor’s degree, after which she will pursue a career as a user experience designer, where she can create web and mobile applications that are intuitive and friendly to the user. She also would like to continue creating comedic and lifestyle videos on various platforms and advocate for South Asian representation.

Although she began college without a clear plan, Subramanian found her way and thrived during her time at COD.

“Though I’m still a young adult who is finding their path each day, my two years at COD have made me realize success is subjective, and to think our paths must look like those around us is an incredible disservice to our passions, goals and creativity,” she said. “If you feel COD fits into your pathway, then embrace it and indulge in all the resources and experiences it has to offer, for you are in the process of creating your own story.

“During my time at COD, I’ve not only been able to perform highly in my courses but also create a digital presence that extends beyond myself. I’ve been able to grow both academically and personally, creating a future that is right for me. COD isn’t a place where you need to fit in, but instead a place where you can create your own world.”

More about Interactive Media at College of DuPage

More about Graphic Design at College of DuPage