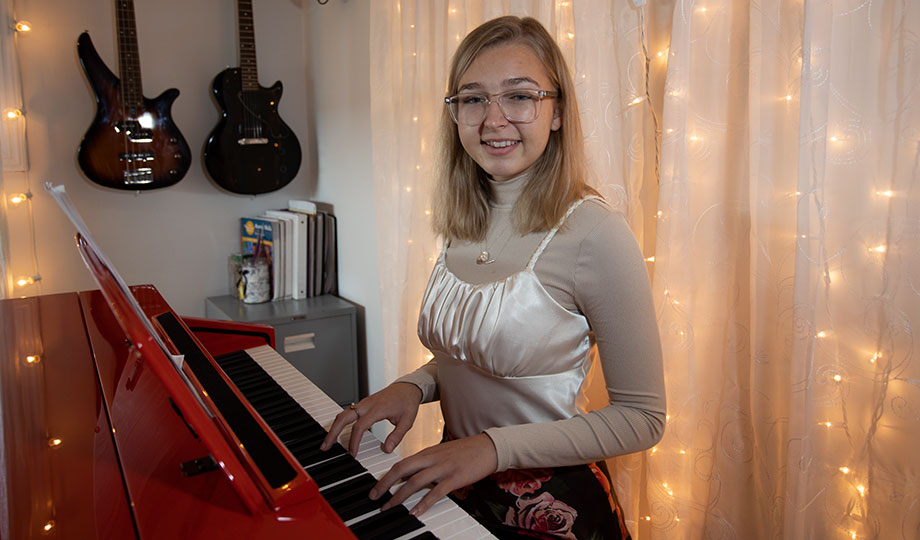 When she was young, Sara Richert began taking piano lessons and fell in love with them.

“Music was an avenue to express my imagination and practice my creativity from an early age,” she said. “Once I learned how to notate, I would create little nursery rhymes and hand-write them on manuscript paper to show my music teacher. As time passed, I realized that music was something I really enjoyed and wanted to experience throughout my life.”

Although Richert knew she wanted to go to college, her high school experience left her with doubts.

“Being completely honest, I was not a very confident senior in high school. My high school GPA was average and I felt very unqualified,” she said. “I thought that there was not much use in applying to schools because I would not be accepted anyway. Just like many students, the application process was intimidating for me as a 17 year old. The open admissions policy at College of DuPage was appealing and I felt comforted to know that I was going to be 100 percent accepted somewhere. A COD counselor visited my high school and after the next couple of weeks, I was admitted.”

Attending COD also meant making a financially responsible choice. While Richert’s parents were supportive, she knew she would be paying most of her college tuition and didn’t want to put her financial future in jeopardy. Thankfully, she was named a Deans Scholar, which provided for a portion of her tuition, and later received the Foundation General Fund Scholarship and the John Belushi Choral Scholarship through the COD Foundation.

“These opportunities were so helpful to relieve the financial responsibilities I was facing. It also helped develop more pride in my institution knowing that COD deeply cares about the well-being of students,” she said.

Unlike her high school experience, Richert discovered an atmosphere that allowed her to continue her musical education through applied lessons, challenging projects and performance, including the Music Fridays@Noon series.

In addition, she built leadership skills through her participation in the Living Leadership program and New Student Orientation, as well as her job as a professional music tutor for Tutoring Services. Richert felt honored to give back to the COD community and help students in the same way she was helped.

In graduating with her Associate in Fine Arts and earning high honors, Richert also was recognized for excellence by the Music faculty during the College’s annual Celebration of Academic Excellence and sang the national anthem during Commencement. She plans to pursue a bachelor’s degree in music therapy.

“Music is an incredibly strong force that can influence, change and heal so many aspects of society,” she said. “I have chosen this path because I deeply believe in the power of music and want to bring it to people who are in need. Speaking with COD alumna Beth Blankenship and learning her story has also given me clarity of what it is like to be a music therapist.”

Richert advises students to look at COD as a serious possibility due to its affordable cost, myriad programs and opportunities to get involved.

“There was a stigma circling around my high school about COD. I felt ashamed for going to a community college and not a conservatory like my peers,” she said. “However, I now view my education very differently and am so grateful for the amazing experience I had. For artists, specifically musicians, I highly recommend College of DuPage. The Music program has small class sizes, highly educated faculty and so much opportunity for freshman and sophomore students. It is truly a gem.”