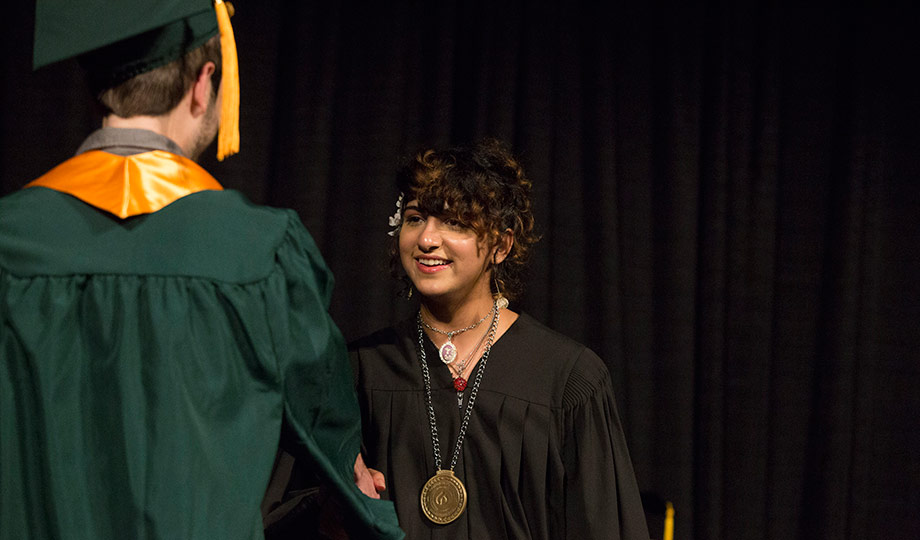 Sonia Paul’s desire to accomplish what she could not do in high school fueled her involvement at College of DuPage.

During her senior year, she was diagnosed with Hodgkin’s lymphoma and underwent four rounds of chemotherapy. She missed three months of school and the application deadline for most colleges and universities, which forced her to reconsider her options.

“I wanted to live in a dorm and have the four-year experience that people always talk about,” she said. “I had all of the misconceptions that prevent people from choosing a community college. In the end, by coming to College of DuPage, it worked out the way it should have.

“What I loved the most about COD was the relationship students have with their teachers. They had a real interest in knowing me and helping me, especially (Associate Professor of Psychology) Elizabeth Arnott-Hill and (Counselor) Michael Duggan.”

Paul assumed several leadership positions at COD, including as the Student Trustee on the College’s Board of Trustees; president of Psi Beta, the College’s chapter of the National Honor Society in Psychology; the outreach officer for Feminist Alliance; a Student Ambassador; and a student mentor for COD Buddies, which pairs students with intellectual or developmental disabilities with mentors to help guide them around school.

Paul described her transfer from COD’s energetic, inviting and involved student body to the unfamiliar University of San Francisco as “culture shock.”

“It has been nothing short of difficult, exciting, initially a little discouraging, and eventually perfectly enlightening,” she said. “I was less surprised to see that the personality and artistry that exists in San Francisco was pleasantly a reminder of the opportunities for expression and creativity that I had at College of DuPage. In fact, I argue that College of DuPage is superior to many four-year schools in the area of extracurriculars and on-campus engagement due to the consistent and added effort that it makes to retain students involved. COD primed me for San Francisco in ways that I had not even become aware of until I got there and had no choice but to grow and apply.”

While she did begin her involvement in several groups, she eventually found herself aching for the COD club climate that did not exist at her transfer school. She also wanted to focus on her new major, marketing, which was becoming more demanding.

The biggest catalyst for her transformation after transferring was her teaching assistant position for the course “Managerial Decision Making.”

“This course includes heavy elements of psychology, sociology and negotiations and covers a wide range of relevant topics,” she said. “I took the class myself and thoroughly enjoyed it, as it was everything that I loved—psychology, sociology, human behavior—safely blended with everything that I was fearful of, such as math, calculations and on-the-spot performance. This created a perfect environment for me to realize how entangled the two truly can be and to find joy in spending time on both.”

After the pandemic started, Paul was contacted by her professor with a proposal: As he lectured, she would be the TA and draw live illustrations for the class, which included elements of visual storytelling, illustrating and note taking. She initially worried about the live aspect of her work, and the element of randomness meant she had to be prepared.

Thankfully, the class went so well that she is now illustrating for an undergraduate class as well as two types of eMBA classes with full-time and part-time executives in various fields.

“Working with my professor and the students has been a remarkable experience of constant expansion, even if I didn’t always feel confident,” she said. “A big part of growing into this position and becoming comfortable with it was reflecting on COD: at College of DuPage, I sometimes felt immobilized by imposter syndrome, especially during my term as student trustee and president of Psi Beta. On some days, I felt unqualified, disorganized and overall a mess. In hindsight, as most of us tend to do, I didn’t give myself enough credit for what I was doing with the resources that I had, but my attempts to change and become better still did not feel like they were accomplished.

“Being a TA for this course and having to show up and perform in front of people who were more qualified than me in some of these fields weirdly forced me to be OK with abandoning imposter syndrome. And as soon as I began to allow myself to do so, things began to change in direct correlation. The tugging guilt and shame that I had to experience from being less-than-happy with myself in leadership positions at COD lasted a long time after I left, but eventually transformed into the most enlightening lesson that I’ve learned in my career so far. In addition, my original plan to incorporate psychology and art into my marketing career has only been engrained deeper by this TA position. I am also recently entering finance and studying to become a Certified Financial Educator so that I can educate myself as well as other families in this country.”

As she reflects on her experience at COD, Paul realizes that it was the best choice she could have ever made.

“It all feels like it was a wonderful and enlightening dream, and I am extremely grateful to have benefitted so much from attending,” she said. “I am loving and trying to soak up every minute of my time at the University of San Francisco, one reason being that it’s a whole new set of lessons which wouldn’t have been possible if not for what I had learned at College of DuPage.

“This might sound dramatic, but I miss College of DuPage like it’s a full-on heartbreak. I know without doubt that the opportunities I was fortunate enough to experience would not have been in my grasp if not for my selection of College of DuPage.”

Learn more about the Psychology program at College of DuPage