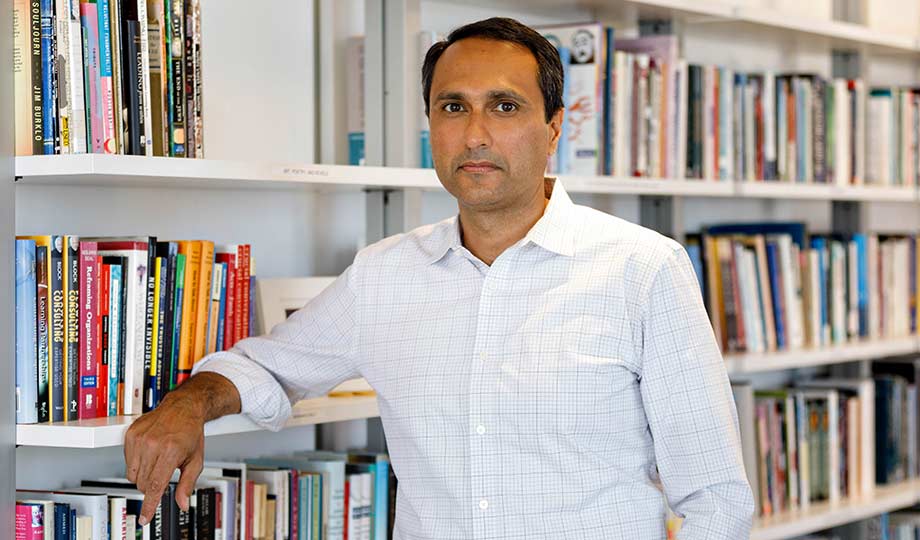 Eboo Patel is a man on a mission – a really big mission.

This has inspired the Rhodes Scholar and former College of DuPage student to take many bold steps in a career even he admits can be hard to wrap his head around.

Patel is the Founder and President of Interfaith Youth Core (IFYC), a Chicago-based, nonprofit organization building interfaith cooperation across the country. The idea grew while he was a student at the University of Illinois, where he was involved in social justice work. Patel came to realize that the leaders he respected most found their inspiration in faith.

While earning a doctorate in the sociology of religion from Oxford University on a Rhodes scholarship, Patel began organizing interfaith projects around the world, laying the groundwork for what would become IFYC. For more than two decades, he has led the organization from a handful of volunteers to a nationwide nonprofit that empowers students and educators on almost six hundred U.S. college and university campuses.

“We created a movement in America with tens of thousands of college students who are committed to the idea that we're better together,” he said.

His outreach vision captured the attention of people in high places, including former President Barack Obama, who appointed Patel to serve on the inaugural Advisory Council of the White House Office of Faith-Based and Neighborhood Partnerships.

In addition, Patel is an Ashoka Fellow, a member of the Young Global Leaders Network of the World Economic Forum and has served on the Religious Advisory Committee of the Council on Foreign Relations and the National Committee of the Aga Khan Foundation. He was named a Future Policy Leader by the Harvard Kennedy School Review in 2008 and one of America’s Best Leaders by U.S. News & World Report in 2009.  He has been awarded the Guru Nanak Interfaith Prize, the El Hibri Peace Education Prize and the Council of Independent Colleges Academic Leadership Award, along with honorary degrees from 15 colleges.

Patel delivered closing remarks at the 2011 Nobel Peace Prize Forum and has spoken at the TED Conference, the Clinton Global Initiative, and universities around the world. He is an affiliate of the Pluralism Project at Harvard University and its pioneering study of America's changing religious landscape.

In his book “Acts of Faith: The Story of an American Muslim, the Struggle for the Soul of a Generation,” Patel chronicles his personal journey from a young boy growing up in Glen Ellyn to a young man discovering his global purpose.

“We are all many possible people. How we become who we are has everything to do with which of those possibilities is nurtured,” he said. “College of DuPage helped nurture the intellectually curious, ethically focused Eboo Patel.”

“Acts of Faith” won the Louisville Grawemeyer Award in Religion. He also published “Sacred Ground: Pluralism, Prejudice and the Promise of America” and “Interfaith Leadership: A Primer,” as well as a regular blog, “Conversations on Diversity,” for Inside Higher Ed.

In 2018, Patel’s latest book, “Out of Many Faiths: Religious Diversity and the American Promise,” was published by Princeton University. It examines broader questions about religious diversity in cultural, political and economic life. In its review, Publishers Weekly said, “Readers will be rewarded with Patel’s rich perspective on religious diversity in America as he champions the strength of its civic identity and the possibility of religious pluralism in the years to come.”

“ ‘Out of Many Faiths’ demonstrates how the genius of the American experiment lies in its empowerment of people of all creeds, ethnicities and convictions,” he said.

Patel’s op-eds and interviews continue to appear in The New York Times, Washington Post, The Chronicle of Higher Education, on National Public Radio, and “The PBS NewsHour.” He also publishes a regular blog for Inside Higher Ed, “Conversations on Diversity,” and in 2020 he was named in Time magazine’s “Meet 27 People Bridging Divides Across America.”

His latest book, “We Need to Build: Field Notes for Diverse Democracy,” will be released by Beacon Press in spring 2022. Learn more about "We Need to Build."

Patel, the son of COD Accounting Professor Rukshad Patel, said he explored many subjects at COD during his high school years.

“Here was this wonderful resource right around the corner from where we lived,” he said, recalling the classes, the professors, even some of the lectures that became his introduction to some really big ideas.

“I am personally glad that what I got to do at College of DuPage was wander off the beaten path of typical professions, to whet my intellectual appetite a little bit, and then to follow that path to where it would lead me.”

Learn more about Transfer programs at College of DuPage