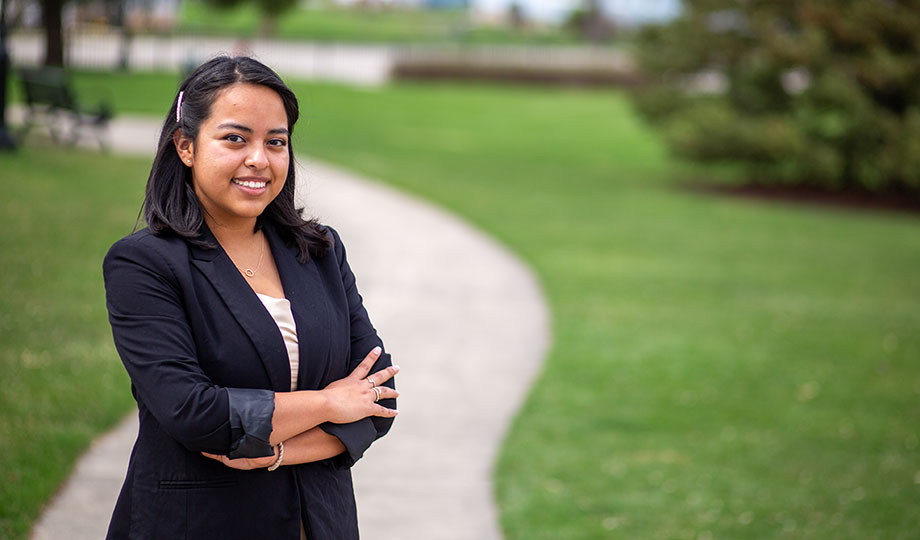 Belem Oseguera Duran did not think continuing her education beyond high school was a possibility.

“I am a low-income, first-generation student. While many colleges offered scholarships, the tuition prices were still too high for my family,” she said. “However, after applying for scholarships at College of DuPage, I was notified that I was a Presidential Scholar, which meant my tuition would be covered in full. I remember feeling a surge of relief when my counselor gave me the news and after that, I knew COD would be the college I wanted to attend. COD provides many sources of financial support for their students, and my family and I will forever be grateful for that.”

Being a Presidential Scholar also meant Oseguera Duran was enrolled in the Honors Program. She enjoyed the smaller class sizes that engaged students to think outside the classroom, and one of her favorites was English Composition II with Associate Professor Steven Accardi.

“While many of my other honors courses helped me apply what I learned in class to the real world, it was in this class that I felt like I was actually making a change in the world around me,” she said. “Our class learned about rhetoric and formulating a strong argument to change an issue we identified. We decided to tackle plastic bag consumption and created a video providing a solution.

“After the class ended, I felt like our hard work could be taken a step further, so I submitted our project to the Honors Council of the Illinois Region (HCIR) Student Symposium. It was an amazing opportunity in which my classmates and I could partake.”

In addition to pursuing her academics, Oseguera Duran continued her work in the community. Her desire to help came from her own childhood and her family’s struggles to succeed. She currently is a parent resource coordinator at her local school district and provides resources to low-income families.

“In the Spanish-speaking community, there is a fear that not speaking the English language is a barrier to getting the resources that can help them,” she said. “In my role, I work with low-income families both Hispanic- and English-speaking who need more assistance. This has expanded my knowledge, which is pretty amazing.”

Oseguera Duran also represents the state of Illinois as one of the inaugural Poderosa fellows with Poder Latinx, a national organization that promotes and empowers the Latina population.

“Since February, I have been working with my fellow Poderosas to expand the Latina Electorate and encourage more Latinas to become civically engaged.It has been a great learning experience to look beyond my own town to the state and the nation.”

Oseguera Duran is pursuing economics, in which she developed an interest while studying business in high school. After taking macroeconomics with Associate Professor Mark Rudisill at COD, she realized how economics can be applied to every sector of a business.

“In economics, you learn valuable skills with which to analyze situations to reach the most efficient solution. You not only analyze the numbers but also how consumers act and why,” she said. “However, I noticed that the theories I learned were also applicable to life outside the classroom and business world. Economics is a subject that allows you to understand the world around you. It is very versatile.”

In addition to earning her Associate in Arts degree, Oseguera Duran graduated with highest honors and was named one of the College’s two Outstanding Graduates. She is transferring to pursue a bachelor’s degree in economics and will decided what to pair with it that will best serve her community.

“For the longest time, I never pictured myself in a specific job. Instead it’s about who I want to be and what impact I can make,” she said.

Oseguera Duran recommends COD to anyone who is trying to figure out a career path and isn’t financially stable. She considers it a place to build a strong foundation from which to grow.

“COD exceeded all expectations I ever had,” she said. “I did not expect to gain much out of my time in a community college. However, after just one event on campus, I grew to love COD and the community it builds. Every class I took helped me grow as a student and challenged me to apply what I learned. I want to give a shout out to all my professors and theater directors for making my time at COD a wonderful experience. I learned a lot from them both education-wise and life-wise.

“I am the first in my family to attend college. I value my education and the sacrifices my parents have made that allowed me to get where I am today, so I will continue to work hard and make them proud.”

Learn more about the Economics program at College of DuPage.