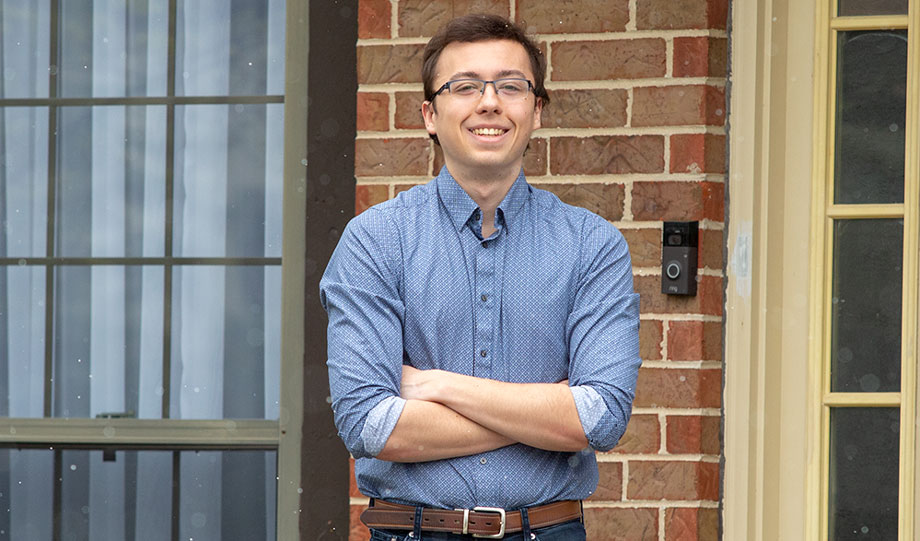 The former Engineering student worked on many projects during his time at College of DuPage, from fixing a drive system for the Robotics Team to constructing a pumpkin-launching catapult with the Engineering and Technology Club.

He also built his own motorized bike, employing ingenuity he learned at COD.

“It was essentially a bicycle with a lawn mower engine strapped to it, the caveat being that it is a pull-start motor which could easily be stolen,” he said. “So, in addition to simply buying a lock, I was able to use the skills gained through my computer science classes and clubs at COD to create a GPS tracking module that operates using a phone’s SIM card and an Arduino microcontroller.”

Lauzadis’ success is a stark contrast to his previous poor grades in school. He was born just two months after his parents immigrated to America. His family lived in six different homes by the time he began school, so he didn’t begin to learn English until the first grade. This created a language barrier that made it difficult to create friendships.

“I was branded the ‘weird’ one, and this isolation continued throughout middle and high school,” he said. “Because of this, I got deferred and denied by every program that I applied to, leaving me with no choice but to enroll at College of DuPage. My peers could only say that it was the ‘smart financial decision.’”

On his first day at COD, he attended the Student Life Fair and saw all of the opportunities offered through the various clubs and organizations. It made him realize that he belonged at COD.

While he was still shy during his first year, he began to get involved. Lauzadis ultimately would become president of the Programming Club; head of computer science for the Robotics Team, for which he prepared software for use in competition, implemented a low bandwidth network protocol for efficient communication, and translated the codebase from C++ to Python; and an organizer of the Engineering Olympics, which had special meeting for him.

“While still in high school, I was invited to participate in the event, but there was not enough interest at my school to send a team of four,” he said. “When I learned it was being hosted again this year at COD, I sprung into action. I worked with the Engineering and Technology Club to create over 50 kits for each activity, which ranged from popsicle stick bridges to mousetrap cars, with a Rube Goldberg machine for the finale. I tested the events carefully, putting myself in the shoes of students. I am very glad with how the event turned out, as many of the teachers were grateful that we provided this experience at a critical point in their students’ lives.”

Lauzadis also was an undergraduate researcher at the National Center for Supercomputing Applications (NCSA) for three terms, where he worked on various geospatial projects with social and environmental benefits. These included detecting landscape change in the Arctic and predicting West Nile virus incidence in urban areas.

While at COD, Lauzadis received the S-STEM Scholarship, funded by a grant from the National Science Foundation. The award included tuition, fees and support systems specifically for recipients.

“The scholarship opportunities allowed me to attend two years for free, lifting a huge weight off of my family’s shoulders,” he said.

In graduating with his Associate in Engineering Science, Lauzadis was named one of the College’s Outstanding Graduate finalists. He then transferred to the University of Illinois at Urbana-Champaign and earned a bachelor’s degree in Computer Science + Geography and Geographic Information Science. Currently he is working as a software development engineer for Amazon and hopes to get involved in robotics in the future.

As for COD, Lauzadis said the “smart financial decision” became the greatest decision of his life.

“College of DuPage gave me a clean slate,” he said. “Beyond being an economical choice, the school’s variety of resources and staff provided an unparalleled experience. The small class sizes allowed me to make personal, lasting connections with countless peers and professors. I would not change anything about the first two years of my college experience.”