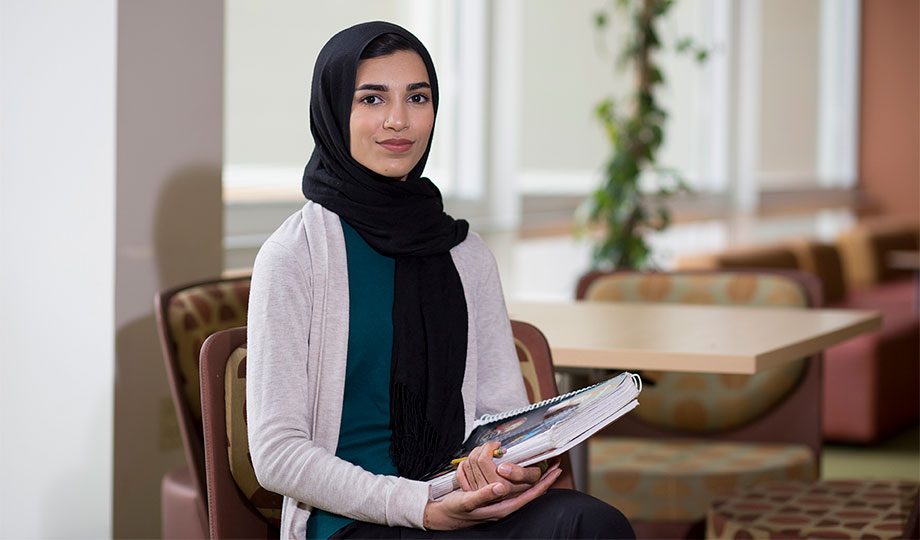 “I had five cavities, but I was more intrigued to see what the dentist and hygienist were doing and how it was done,” she said. “In high school, I focused on becoming a dentist and was really passionate about it.”

However, after taking the ACT, Khan thought her dream was over because of her score. So she changed her focus to nursing and turned to College of DuPage.

“I felt it was the most efficient route for college,” she said. “I would come to COD, take my prerequisites and then transfer. I knew my ACT score would not be a factor, and my siblings attended COD so I was familiar with the school.”

After arriving on campus, Khan saw opportunities all around her and decided to look at College of DuPage as a second chance. She became part of the Honors program and immersed herself in student life. She was president of the Muslim Student Association, joined Phi Theta Kappa, was an orientation leader for New Student Orientation, was elected the Health Science Representative on the Student Leadership Council, and completed the Living Leadership Program.

As part of the Honors Student Advisory Council, she was the organizer of the Silent Walk for Unity. The idea came from her Honors Ethics course with Professor Eva Maria Raëpple.

“Students were experiencing feelings of disconnect,” she said. “The intention of the Silent Walk was to let participants know regardless of their gender, religion, race or sexuality that they were all welcome and accepted. We wanted to promote values of love, respect and tolerance. The silence signified listening.”

Khan also met a friend, James Halper, who encouraged her to pursue dentistry.

“He said that I was in college only one time in my life, so I might as well do what I love,” she said. “I decided to go for it and began believing that I shouldn’t say ‘no’ to myself when other people do.”

Because of her change in majors, Khan ended up with two degrees – an Associate in Science and an Associate in Arts. She also was named one of the two Outstanding Graduates in 2017.

However, she stayed at COD one more year—and, in doing so, served as president of the Student Leadership Council—in order to complete more science prerequisites before transferring to the University of Illinois at Chicago, where she switched her major from dentistry to nursing. Having completing her Bachelor of Science in Nursing, she is pursuing her Doctorate in Nursing to become a family nurse practitioner (DNP-FNP). She currently works part-time at a hospital on the Acute Care for the Elderly unit, and her goal is either to open a private practice for patients in underserved communities or work as a family nurse practitioner at an outpatient clinic.

Khan is glad to be pursuing a career in health care. She will always be grateful to the College for helping her discover her potential. It’s also where she met her husband when both were serving on the Student Leadership Council.

“My experience at COD surprised me in a way that I didn’t expected it to,” she said. “I thought I would just transfer and maybe get a job on campus. But I got involved and even was a club officer as a freshman, which wouldn’t have happened at a four-year school.

“I also loved the diversity, which is a huge asset to campus. You have people surrounding you from around the globe, and it makes you realize how much you can learn outside of the classroom.

“I would tell prospective students to not be afraid to get outside of their comfort zone. The only way to learn what your limits are is to push past them. I learned what my potential is, so don’t be afraid to walk through waters of uncertainty.”

Learn more about the Biology program at College of DuPage