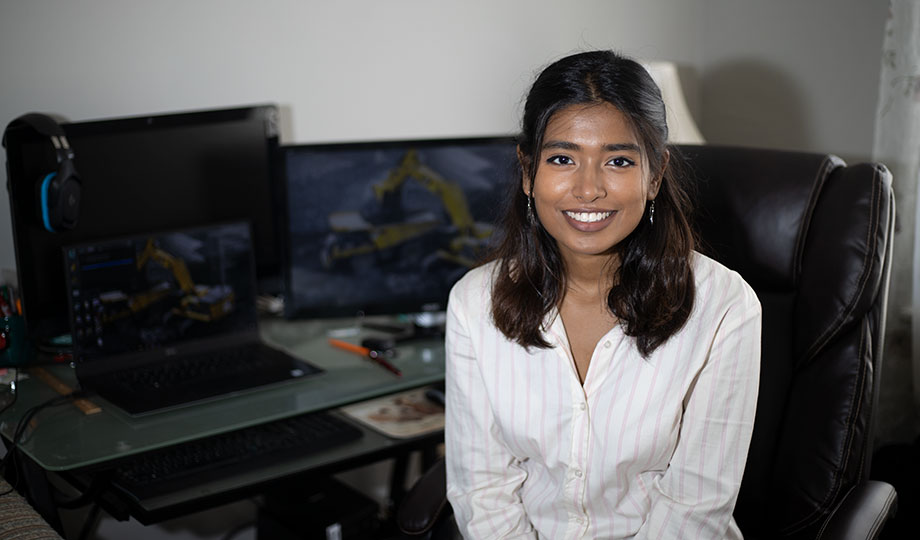 Growing up, Jessica Halder was strongly influenced by moving from Bangladesh to America.

“Bangladesh does not have much of the technological advancements I’ve taken for granted living in the U.S., and I am taken aback by the differences I notice every time I go back,” she said. “I visited Bangladesh a few years ago and I hadn’t realized how much I depend on having constant access to the internet or even basic necessities like running electricity and clean water. When I stayed in villages outside the capital, I was fascinated by the number of small shops whose only source of electricity was solar power.

“I didn’t grasp just how much I took for granted until it was gone. Bangladesh is making immense progress supplying electricity and internet around the county, but progress is still slow-moving in other parts of the world. As I studied the various ways in which the United States is attempting to tackle energy and sustainability issues, I was shocked by this disparity. This made me want to take part in the movement to make energy more efficient and accessible worldwide.”

After leaving high school, Halder was interested in both science and engineering but unsure of which major would be the right fit. She chose College of DuPage because her older brother had attended and knew of its excellence.

“College of DuPage has allowed me to meet students who come from vastly different backgrounds. I gained perspective from fellow students with incredible goals for their futures and joined clubs and organizations that made me realize how expansive fields in science and engineering truly are,” she said. “I’ve met professors who offered a flood of information in regards to transfer schools and advice as I considered my options. They answered questions I did not know I had about building a career and the right steps to take in order to obtain my goals.”

After transferring to the University of Illinois Urbana-Champaign, Halder decided to explore various areas within the field of engineering. She chose to major in Agricultural Engineering, which allowed her to focus on both off-road machinery and renewable energy as her primary disciplines. For her senior capstone project, she designed the foundation of a non-invasive ambulatory EEG headset for a miniature horse to be used in scientific inquiry related to equine-facilitated therapy.

She had an internship with Caterpillar in 2019 and continued working with them at the Research Park as a parallel co-op during her senior year. After graduating with her bachelor’s degree, she transitioned to working for Caterpillar full-time as a design engineer.

Halder encourages any prospective student who is indecisive about the future or hesitant about the costs of big universities to study at COD first.

“Keep an open mind about what your future will look like,” she said. “I’ve talked to countless people who changed their major at least once and ended up being much happier with their second, third or even sixth choice. I would also suggest that you be social with the people you meet in classes or extracurricular activities. The COD student population is so very diverse, and everyone has unique experiences and knowledge to offer. You may end up gaining insight that will help you in the future or friends you will take with you to your future university or career.

“In high school, I did well in math and was very interested in science, but I didn’t yet know how I could work with both for a career. Taking classes at COD motivated me to build a career finding solutions for today’s problems, which ultimately made me realize that engineering is a very good fit for me.”