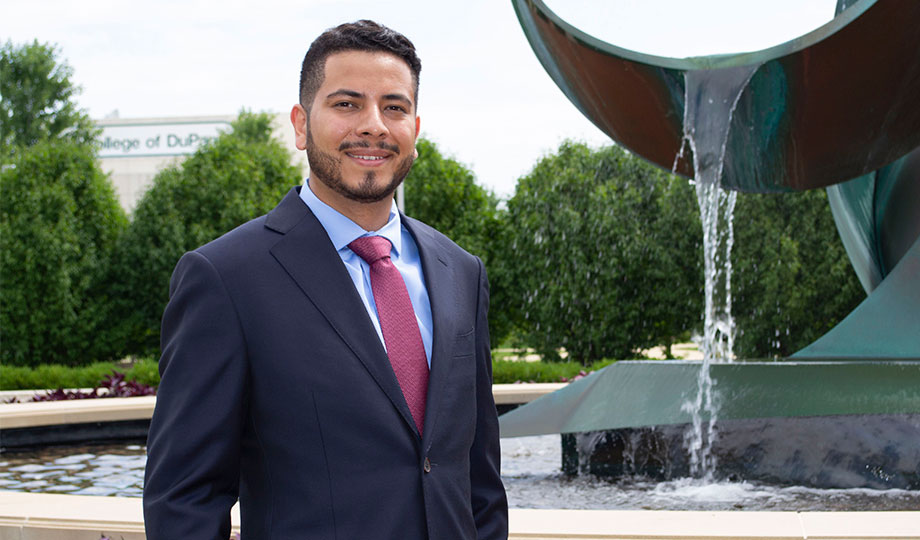 Attending College of DuPage provided Sam Guerrero with the education he always wanted.

“My family would not have been able to afford a post-secondary education for me if it had not been for College of DuPage,” he said. “I also think about my future when making decisions, and the prospect of being drowned in debt did not appeal to me because I knew that it would make it more difficult to start my own life.”

Helping Guerrero develop his skills was his involvement with the Student Leadership Council. As president, he had an opportunity to understand the student perspective on campus and to communicate their comments. He also was chair of the Shared Governance Council, which served in an advisory capacity to the College president and consisted of the constituency group leaders.

“All of these opportunities helped to shape my goals in determining who I wanted to be when I graduated from college, and I learned to always be aware of the people you are representing,” he said.

The scholarship helped Guerrero pay for his education. While at COD, he was a Student Ambassador and worked in the Admissions and Outreach office. As the oldest of three boys, he was always aware of his responsibility as a student and a role model.

“I am always conscious of the example that I am setting for my younger siblings. I want to show them that no matter what obstacles you may face, they can be overcome with hard work and persistence,” he said.

Guerrero graduated with his associate’s degree and was an Outstanding Graduate finalist. He received a full scholarship to Benedictine University and was elected as President of the Student Senate. He also had an opportunity to serve on the board of the Consulate General of Mexico in Chicago and participated in Juntos Podemos (Together We Can), which promotes the well-being of Mexicans in the United States and their ties with Mexico.

He is now the Manager of Community Engagement at Innovation DuPage, a business accelerator and incubator in Glen Ellyn that was founded by COD, the Village of Glen Ellyn and Choose DuPage.

“Having the opportunity to work for a nonprofit organization that helps entrepreneurs either start or grow their businesses is fun for me,” he said. “I always had the idea of starting my own business. Now I’m using the soft skills I learned at COD and Benedictine as well as through my real estate career to work with entrepreneurs as they build their product. It’s incredibly inspiring and I know this will be instrumental in my own career development.”

Guerrero’s ability to network with people began during his time at COD.

“College of DuPage provided me with a plethora of ways to accomplish my educational and career goals,” he said. “Being involved on campus allowed me to become an active member in the society I live in. It has shaped who I am today, and it was great to be able to represent the voice of so many talented students.

“Not only was being president of the Student Leadership Council an incredible opportunity, it was part of the journey that brought me here. My journey is comprised of the people who have helped me to trust myself and who have helped to develop my leadership skills. It is the courses I have taken and the adventures I’ve had that have paved the way for my future.”

More about the Associate in Arts