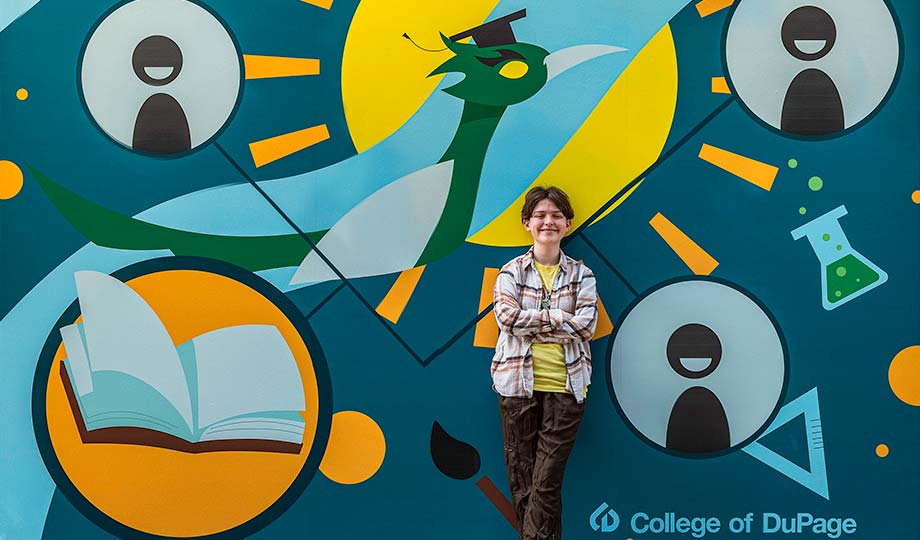 “As a kid, I liked how cartoons could express emotions a lot more clearly than live-action,” he said. “But it wasn’t until middle school that I realized I could learn how to make cartoons myself.”

In high school, Gray took all the design classes he could and worked with Adobe products. He began animating the summer before starting at College of DuPage.

“With my previous character design and illustration knowledge, animation came as easy as breathing, give or take a sore wrist from time to time,” he said. “College of DuPage was the closest college that had animation courses. It had many good reviews on how well the campus and teaching were compared to the cost, and that was really what sold me.”

While at COD, he received two COVID-relief scholarships as most of his education took place during the pandemic.

“These were immensely helpful at the time, as many know how the pandemic was,” he said. “I too was struggling with money due to fears of bringing COVID to my family members.”

Gray also took a graphic design class that resulted in his mural work being selected for display at Oakbrook Center.

COD had many good reviews on how well the campus and teaching were compared to the cost, and that was really what sold me.

“Taking this class was not only be a nice refresher course but also an added credit to my overall degree—a win-win sort of situation for me!” he said. “My original design was of the COD mascot Chappy soaring high in the sky, wings open, diploma held in its beak as it wore a graduation cap. Due to the nature of the project, the final rendition had to incorporate the designs of all my classmates’ submissions. Realistically, combining 50 designs is almost impossible. There will always be some aspect of a design that clashes badly with another, but I tried my best and the result is what you see.”

After graduating with his Animation certificate, Gray would like to be a professional animator and comic artist. He recommends COD’s Animation program and suggests students buy a drawing tablet.

“Even if you are able to go in person and use their drawing tablets, buy one and, specifically, one that can hook up to your computer,” he said. “You’ll never know when you just won’t have the energy or the ability to go to the campus and draw, so having one at home can definitely help with whatever creative urges you might get in the middle of the day or night. As for classes? Don't feel like you have to already know what you’re doing. And if it’s not for you, then that's fine—at least you learned something new, right?

“I always wanted to make cartoons and tell stories, and now I can. In a perfect world, I would just draw comics and clean counters. But realistically, I wish to be an animator or character designer for some indie video game so I can go home and just draw comics in my spare time.”

Learn more about the Animation program at College of DuPage