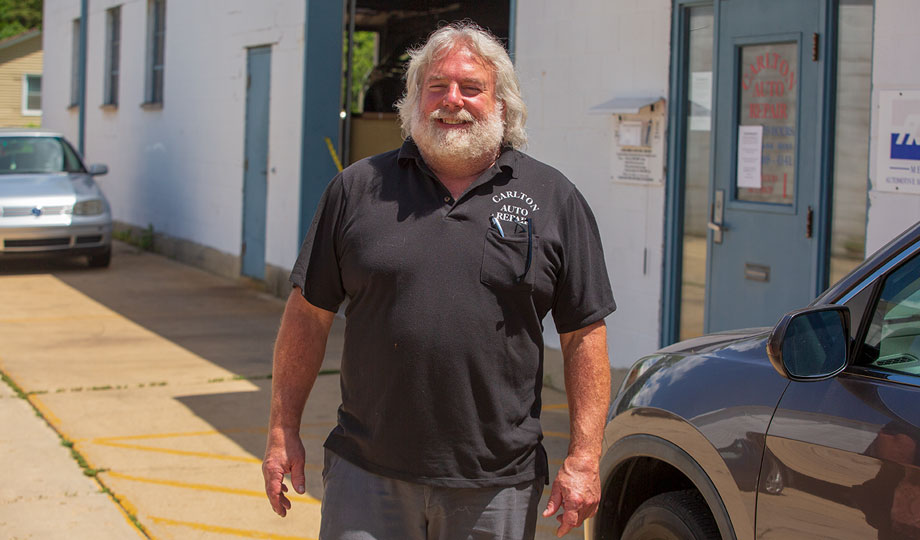 Bob Fouts became interested in automobiles when he was growing up, working on cars with his dad in the driveway.

On weekends, he spent all of his time with his paternal grandparents, who had a farm in southwest Michigan.

“We fixed everything there—tractors, implements, the house,” he said. “My grandfather was a physics teacher, so everything I did with my grandparents was a physics lesson. I continued taking all the science courses I could in high school, and I believe a great understanding of physics and electronics has made me understand vehicles as well as I do. When my students ask, ‘What other kinds of classes should I take to excel in this field?’ I always tell them, ‘Take any physics and electronic classes. If you understand that, you can figure out any problem on a vehicle.’”

His high school teachers at DAVEA (now Technology Center of DuPage) had left to run the Automotive Technology program at College of DuPage. Although Fouts only took one course at COD, the school continued to have a huge impact on his life and career.

“Professor Al Engaldahl came to me a couple of years after I took the one course and asked if I would consider teaching in the program,” he said. “He had been a big supporter of mine ever since high school. He got me into the VICA (Vocational Industrial Clubs of America—now SkillsUSA) competition in Springfield back in ’78, he got me my first job in the field by giving up his summer job so I would have an opportunity in a good, nurturing shop, and he convinced me I could teach at COD and that I had a lot to offer the students there.”

Fouts spent the first 12 years in the field at a shop in Wheaton, which he called a great place to learn. His brother Russ, who also taught at COD for several years, started working with him at that shop after being unable to find work as a captain on a great lakes freighter.

“We decided we wanted more control over how the work was done and how the customers were treated, as our boss John was working his way out of the shop due to back problems,” he said. “We asked for some things to change, but they didn’t, so we decided it was time to facilitate a change for us.”

The brothers began looking at shops for sale or buildings where they could start one. Fouts asked for advice from an older gentleman in Wheaton who ran a radiator shop, repair shop and a moped rental/sales business. The gentleman, who was 78 and ready to retire, asked whether the brothers would want to by his shops.

“In the end, he helped us out enormously,” Fouts said. “He financed our business, he taught us a lot about running a business, gave us great advice. He was a great man and had helped many people, built and sold several businesses, but I believe we were the only ones that actually paid him in full and early at that. We took our time and built a great reputation for doing the job right the first time, using the highest quality parts and procedures, and being honest above all. By doing this, we have built a great clientele of folks who like to be treated well and honestly, and it has been a very rewarding experience!

“In this journey, we have been able to train many young people, in a nurturing way, and we feel we have made a real difference in many of their lives. This has also been very rewarding, as we have past employees who have become full-time teachers, homeowners and successes in many industries. We are proud of that and them.”

Fouts also taught at COD for 15 years. But with the new business and other aspects of life, he stepped away from teaching but remained active by serving on the Automotive Technology program’s advisory board. Once life slowed down, he returned to teaching and loves it.

“It brings me such joy to be able to bring my knowledge and experience to my students,” he said. “You know, ‘If you need to heal, look for a man with scars,’ and I have plenty of them. As hard as it is to go out two nights a week all semester long, I wouldn’t give it up for the world.

“I strongly recommend the Automotive Service program at COD as I believe it is one of the best values in this industry anywhere. There are some for-profit schools that spend a lot of money on advertising, and you can get through them quickly, but man, they cost a lot and from what I have seen and heard from my employees, the education is not any better and often not near as good as the COD program. If you want to go on, every hour is applicable to another school like Southern Illinois University. If you spend over $40,000 at the for-profit school, not one hour or dollar goes toward your bachelor degree, and that really stinks for someone who wants to continue their education! COD is the best value I have seen in this industry.”

More about the Automotive Technology program