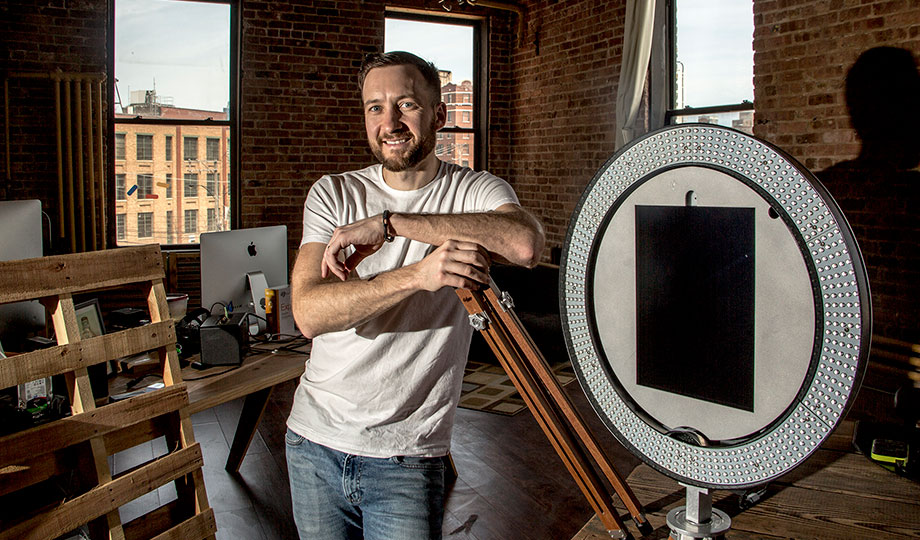 Ben Chernivsky first became interested in photography while reading National Geographic magazines as a child – although “reading” technically may not be the correct term.

“Since I couldn’t read quite yet, I was kinda forced to only read the visual, which were the beautiful photographs on the page,” he said. “It opened up the world to me and really made me want to reach out further from where I was at. Journalism drove me into actually holding a camera for the first time – first at my high school and then at College of DuPage when I worked for the Courier as the Photography Editor.”

However, College of DuPage was not his first choice – or his second or third. In fact, his goal was to go to college as far away from the DuPage area as possible.

“It really hit me hard when I wasn’t even accepted to the two colleges I applied to. It didn’t help that I applied about six months before I was to attend college for the first time,” he said. “It was a real reality check in terms of what I knew about the formalities and demands of attending a good college. Honestly, I wasn’t applying to these other colleges for the right reasons anyway, and looking back, my mother was absolutely correct in leading me toward COD. My mind was everywhere, and my interests drove me all across the educational gamut. COD ended up being the best place to really play with the higher educational system while actually learning new skills.”

After his first quarter, Chernivsky was again pushed by his mother toward something new: the Honors program.

“Reluctantly I applied and got in. The head of the program must have seen something in me that I didn’t, because the honors classes are what really drove my interest in higher education,” he said. “Both the teachers and the students had a keen intuition and drive to be in the classroom, and that level of intellect really had a positive effect on me.”

After five years at COD, Chernivsky earned both an associate's degree and the Photography certificate and then decided to take one year off from college. But one of his mentors, COD Photography Professor Jeff Curto, lightly persuaded him to attend North Central College.

Chernivsky applied as an honors transfer student after hearing about how much the school liked COD transfers and how much in grants they awarded.

“I was literally shocked at how much they were going to pay me to attend just for having a good GPA,” he said. “I was torn between going to a specialized photography college or staying local. When I told Jeff about the grant I was getting through NCC, he said something along the lines of ‘Well, if someone is willing to pay you to attend their college, why not give it a try?’ Those are the words that drove me to, at least, give it a try.

“And NCC was awesome. They took me to London for an abroad and the level of education was so much different than I had witnessed. I loved the small college feel of a 3,000-student campus. But my interests ultimately transferred me to an even smaller liberal arts college – about 500 total students – down in southern Illinois called Principia College, where I earned the most practical, demanding and driven education I could ask for. I finished an English degree in Creative Writing with an absolute love for something I would have never imagined I could focus on. But I wouldn't have been ready for it without my previous experiences at COD and NCC.”

After working in magazine and journalism photography, Chernivsky opened his own successful wedding photography business, This Is Feeling, after realizing there was a lack of innovation and creativity in the business. He also started a second business, Gifyyy, which manufactures animated gif photo booths that are selling around the world.

Chernivsky loves the creativity and value in the field, and he loves showing people the value of not only who they are but also of their place in the world.

“Photography is at such an interesting place in history. There’s no room for a lethargic approach toward the craft. There’s also no need to race toward it,” he said. “There’s much more to photography than the technical aspect of it. Go and learn about the world, people, humanities, science, religion, politics and business. The better person you become, the more applicable photographer you will become. It’s not enough to just study photography.”