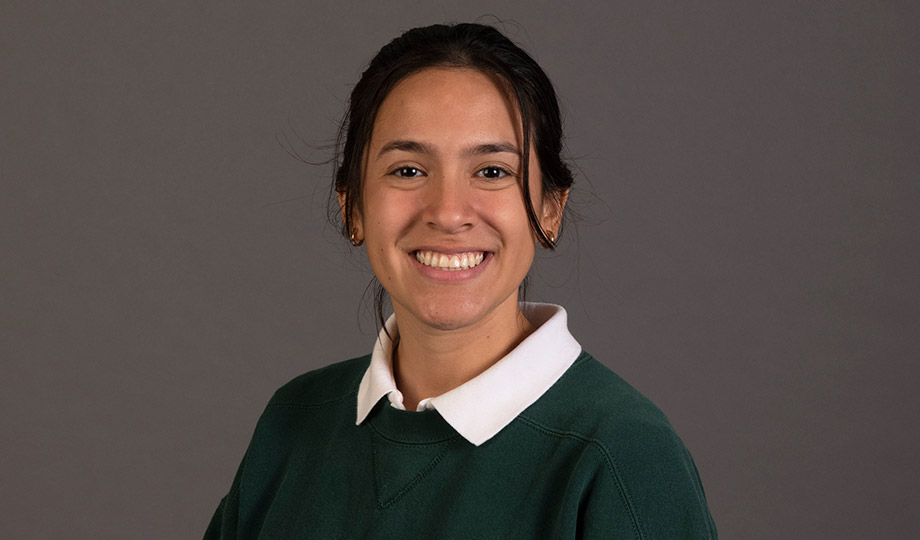 Marcela Calderon decided attending College of DuPage was the smartest move in the long run.

Being named a Presidential Scholar, which includes a full-tuition scholarship for two years and enrollment in COD’s Honors program and the Phi Theta Kappa Honors Society, helped Calderon focus on both academics and athletics.

“I wanted to take advantage of the affordable, valuable education and resources COD offers,” she said. “Because I played on the soccer team at COD, I was able to continue playing a sport that I loved after high school, and now I will get to keep playing at the school I am transferring to.”

While at COD, Calderon was selected by the National Soccer Coaches Association of America to the NJCAA Division III Second All-American Team, which she considered one of her greatest achievements.

“I received this recognition after I played an entire season in a position I was not used to but had significantly more influence on the field than my previous one,” she said. “I worked really hard to make sure I was someone my teammates could depend on to make the right decisions. The award made me feel like all of the work I put in paid off.”

Off the field, Calderon co-founded and worked as a marketing intern for the COD Community Education Fuel Garden, a project aimed at alleviating on-campus food insecurity. Through the COD Foundation, I was fortunate enough to receive the Foundation Textbook Scholarship, the Naperville Rotary Club Charities Scholarship, the Julie Svec Memorial Scholarship, and the Paul W. and Katherine T. Hedburn Textbook and Supplies Scholarship.

“These scholarships gave me peace of mind while I was studying at COD,” she said. “I felt I could really focus on my education rather than worrying about how I will be able to pay for its costs and extensively work to cover it.”

In 2018, Calderon was named one of the College’s outstanding graduate finalists. She transferred to Roosevelt University, where she was the varsity women’s soccer team captain, the Heller College of Business’ student advisory board marketing representative and a Student Athlete Advisory Committee member.

Having earned a bachelor’s degree in Business Administration with a marketing major and social entrepreneurship minor and graduating with highest honors, Calderon currently works as a content strategist at Youtech, a marketing agency in Naperville.

“With marketing, you can apply creative and analytical thinking that you might not otherwise get to in other areas,” she said. “Additionally, it’s a job where you get to see your direct impact on the company brand and its consumers, which makes the work feel really rewarding.”

She also remains connected to soccer through P2Soccer as a club trainer at Lombard Firebirds Soccer club, where she played while growing up. In 2021, Calderon was named P2Soccer’s Club Coach of the Year.

“It was a huge honor for me, having just gone from player to coach, as it’s so influential for the young girls I work to have a strong female role model to learn from. It was also presented to me by my current director of coaching/former club coach, so was a cool full-circle moment!”

Calderon encourages others to be proactive about what they want.

“For me, I knew I wanted College of DuPage to be a cost-effective transition before I went to a four-year school,” she said. “When I decided on my transfer institution and my major, I researched the school’s Marketing program requirements and used that as a guideline when picking my classes at COD. From that, I was able to complete my associate degree without taking unnecessary classes for my transfer school.

“I learned from a lot of great professors at COD who really challenged me and made me a better student. As for the Marketing program, by just taking the introductory classes, I’ve had a really great experience and learned a lot. I was even able to receive some internships based off just from what I learned in these classes, even over students attending other schools who are further in their programs.”

More about the Business/Management/Marketing program