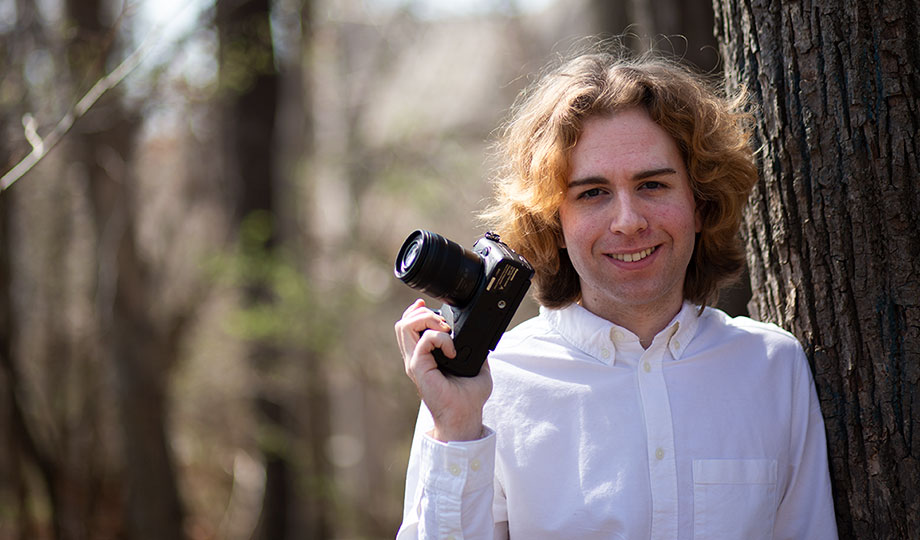 While he enjoys all types of media, including movies, TV and video games, he kept coming back to film when considering his future.

“For a while, I struggled to find what I actually wanted to do with my career,” he said. “Film was what truly interested me, and I knew it wouldn’t lead to a dull life. I am of the mindset that you should do what makes you happy in life since you only live once. Filmmaking is what makes me happy, which is how I know I won’t regret not pursuing my dreams later down the line.”

Buchanan chose College of DuPage for three main factors: family, location and cost. He was named a Deans Scholar, which provided for a portion of his tuition, as did receiving the COD Foundation’s Jesse J. Lopez, Mary Mack and Foundation Textbook scholarships.

Several of his cousins also attended COD and had positive things to say about their experiences.

“I knew COD was a reliable institution that ensures success,” he said. “The campus is only 20 minutes away from my house. This meant I could save costs with travel and remain in the area. Finally, COD kept tuition extremely low. Because of the scholarships and aid I received, I was able to graduate 100 percent debt-free.”

As a student in the Motion Picture/Television (MPTV) program, Buchanan enjoyed many opportunities to develop his skills. He produced several films that included scheduling, paperwork and management in order to create smooth and organized productions. During his Advanced Production class, he worked with classmates on a project that included raising funds for the $3,500 budget, designing the marketing campaign, food delivery for cast and crew, determining travel costs, and editing supervision.

The project addressed depression and drug abuse, which attracted Buchanan because of his volunteer work in the community. This includes promoting mental health awareness and addressing social justice and political change.

“I think filmmaking, and art as a whole, can be extremely influential in reflecting our society. It can comment on cultural issues or bring to light areas of society the mainstream doesn’t see,” he said. “Tying it back to my past volunteer work, I think we all have an obligation to give back to the world around us. It is only through activity that we’ll actually make changes and improvements. It promotes societal wellbeing and pushes us outside our comfort zone. It gives us a window into seeing another world or into someone else’s shoes. This is what makes us aware and better people. This then allows us to create meaningful art that reflects that experience or viewpoint.

“To me, it is really one big cycle where civic engagement allows you to see other parts of the world. This allows you to create meaningful art, which then creates a desire to engage further. I strive for a society based on equality and fairness. I spend a lot of my time signing petitions, sending letters to lawmakers in Illinois and donating to various causes. My goal is to be empathetic, understanding and helpful with improving society.”

Buchanan earned his Associate in Applied Science in Film/Video Production and, in doing so, was named one of the College’s Outstanding Graduate finalists. His goal is to transfer to UCLA, Chapman University or Loyola Marymount University and gain an internship at a production company in order to begin his film producing career at the studio level.

He would encourage new students to the MPTV program to get involved as much as possible.

“Throughout the program, you’ll hear faculty discuss the importance of networking. What can be easily forgotten is that you are networking NOW,” Buchanan said. “Your friends, peers and teachers are your network. Don’t hesitate to work on you peers’ films. Don’t hesitate to ask your teachers for help or opportunities to work. While you are learning about film, building connections for the real world is what really matters.”

More about the Motion Picture/Television program at College of DuPage