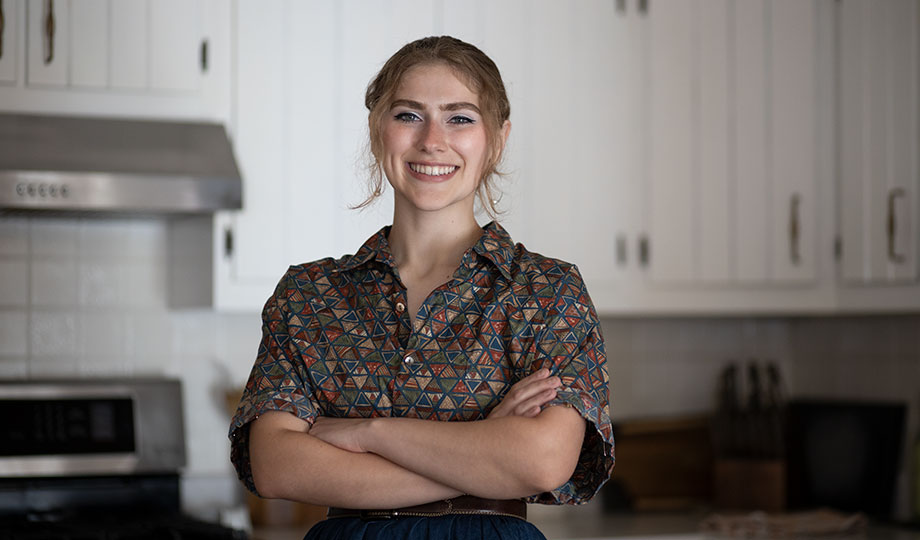 Lucy Benoit always enjoyed being in and around the kitchen, formulating new recipes and cooking for others.

“Throughout high school, I was part of my local Varsity Science Olympiad team, and this spurred me to pursue a career in the field of food science,” she said. “Chef Timothy Meyers at College of DuPage told me about the newer field of culinology, which offers a balance between the culinary arts and food science. Not only do you learn how to cook and prepare both common and intricate dishes, you also learn why different processes and reactions happen and how to use them to their advantage. Due to my love of being in the kitchen, I decided this was the best degree for me.”

Benoit liked COD for other reasons: its recent growth and renovations, its close in proximity to her home, and especially the caliber of the instructors. Through them she improved her skills while exploring food science.

“I became much more adept at handling and diffusing situations with different personality types, and my love for and knowledge of food science increased due to the efficient way my instructors covered the teaching material,” she said. “Networking is also a huge part of what I’ve seen in this field, and I made many new friendships and connections through the program.”

While at COD, she took advantage of as many unique learning opportunities as possible.

“A few of my highlights included picking grapes and making wine, interning at a regional food manufacturer and designing new formulas to use in production, catering an event for COD’s faculty, and hosting a networking event for the RCA (Research Chefs Association). I truly had a blast while also learning so much!”

After earning her Associate in Applied Science in Culinology and graduating with high honors, Benoit is continuing her studies at Dominican University, pursuing a bachelor’s degree in Culinology and Food Science with a focus in Nutrition and Dietetics. While there, she designed and led a research project, “Applications of Whey in Orange Juice-Based Beverages,” which was conducted and funded through Undergraduate Research, Scholarship and Creative Investigations (URSCI). She later presented her findings and speak on her published research at the annual URSCI expo and the Global Learning Symposium.

Benoit also gained experience as the head of Research and Development at Subco Foods. She now works a wine distributor for Binny's, a position that aligns more closely to her professional goals.

She highly recommends COD to any students considering the Culinary Arts program and was instrumental in convincing Dominical University to create an articulation agreement with COD.

“COD offers a brilliant, affordable program that is the marvel of other schools for both its convenience and excellence,” Benoit said. “Personally, I feel that the instructors and chefs really work with you and help you in your studies. I’ve heard many times throughout my classes that we can always learn something new.

“The instructors are marvelous and you can see that they really want to help you succeed. I absolutely loved my time at COD and urge others to consider it.”

More about the Culinology program