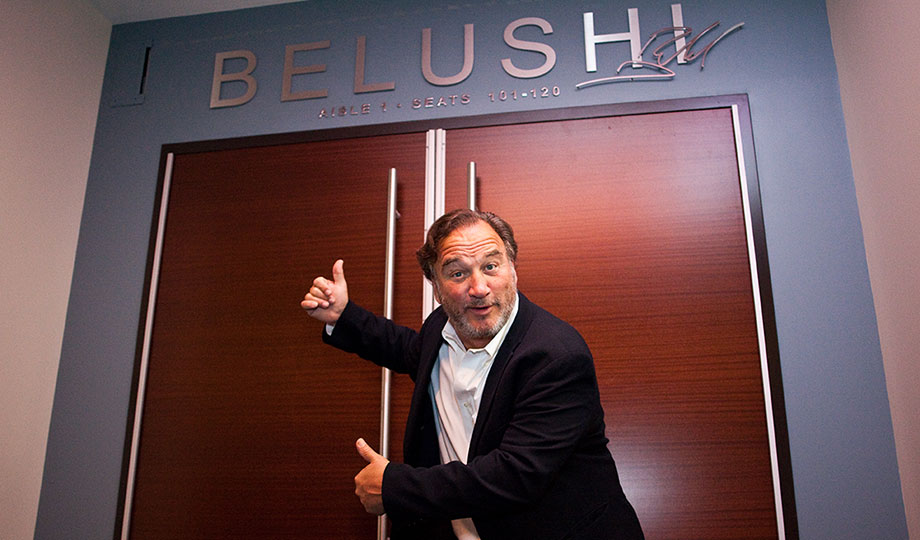 Jim Belushi loves the magic of being in the moment.

“Some people do yoga or golf. I perform on stage to gain that focus,” said the actor and comedian.

Belushi, a 1974 College of DuPage graduate, established the John Belushi Scholarship in 1987 in memory of his brother, also a former COD student. Growing up in Wheaton, the brothers would listen to recordings by such classic comedians as Bill Cosby, Bob Newhart and Vaughn Meader on the family’s lone phonograph player. It was a high school speech in the fall of 1969 that led Belushi to the theater.

“Oct. 15 was the first Vietnam moratorium march in Chicago, so the next day I came into class with a band on my arm, pretending to be a hippie, and yelled at them for not being there,” he explained. “My teacher gave me an ‘F’ because the speech wasn’t organized, but he loved my presence and power. He invited me to an audition for the school’s production of Chekhov’s ‘The Boor.’

“B.F. Johnson from COD’s Theater department attended all of the plays at the local schools, like a coach scouting for athletes. After one performance he approached me and said I should consider the College’s summer theater program.”

Belushi followed Johnson’s advice and landed the part of Harry Brock in “Born Yesterday” (which in 2011 he played on Broadway to strong reviews). He participated in the summer theater program for two years before enrolling at COD.

“I’m so grateful for the love and kindness I received there. I needed the attention they gave to me because I was a screwed up kid. (Assistant Professor of Performing Arts) Richard Holgate steered me away from the hooligan business and found purpose for me.

“In addition to teaching, he would go to various professors’ homes and redo the bathrooms or the roofs or whatever needed to be done, and I was his assistant. He only charged for materials, and when they asked how to repay him, he’d say, ‘Give Jimmy 50 bucks.’”

“Jim was extremely generous with his time and willingness to help others. I’m happy to say he hasn’t changed much,” Holgate said, noting the two still stay in touch.

Belushi also served as a student representative on the College’s Board of Trustees and is proud that he helped get the parking lot paved. But his theater studies provided motivation and opportunity.

“When I hit the stage at Southern Illinois University, I had so much experience that I was cast in the leads. If I had gone to SIU as a freshman, I never would have got my feet on the boards like I did at COD.”

After graduating from SIU, Belushi successfully auditioned for Second City. Television, films and two years on “Saturday Night Live” followed, but his career truly took off after his role in the Apollo Theatre production of David Mamet’s “Sexual Perversity in Chicago” and the subsequent 1986 film version called “About Last Night.”

He has appeared in more than 75 movies and spent eight years starring in the TV show “According to Jim.” Most recently, he shot Amazon’s period magazine drama pilot, “Good Girls Revolt,” playing the magazine’s conservative managing editor.

Belushi teamed up with his “According to Jim” co-star Larry Joe Campbell and four other talented and hilarious Second City alumni to create Jim Belushi and the Board of Comedy. The group brings an improvised comedy sketch show to stages at colleges, comedy clubs, performing arts centers, corporate events, and casinos nationwide. Belushi was showcased in the 2015 HBO miniseries “Show Me A Hero” and in 2017 returned to the small screen and won raves for his performance in David Lynch’s reboot of “Twin Peaks.”

He currently is the owner and operator of Belushi’s Farm, a successful 93-acre cannabis business in Oregon, an area he fell in love with years ago. In 2019, the reality docuseries “Growing Belushi” premiered on the Discovery Channel. The show follows Belushi and his rag-tag team at the farm as they navigate the pitfalls and successes of cultivation while he advocates fiercely in support of the healing properties of cannabis. Season two began airing on Discovery in early 2022.

Belushi still maintains a strong connection to Chicago. In 2014 he returned to College of DuPage for two performances, one benefitting the COD Foundation, and he came back again in 2015. The College surprised him by renaming the former Mainstage as Belushi Performance Hall (pictured above).

Learn more about the Theater program at College of DuPage