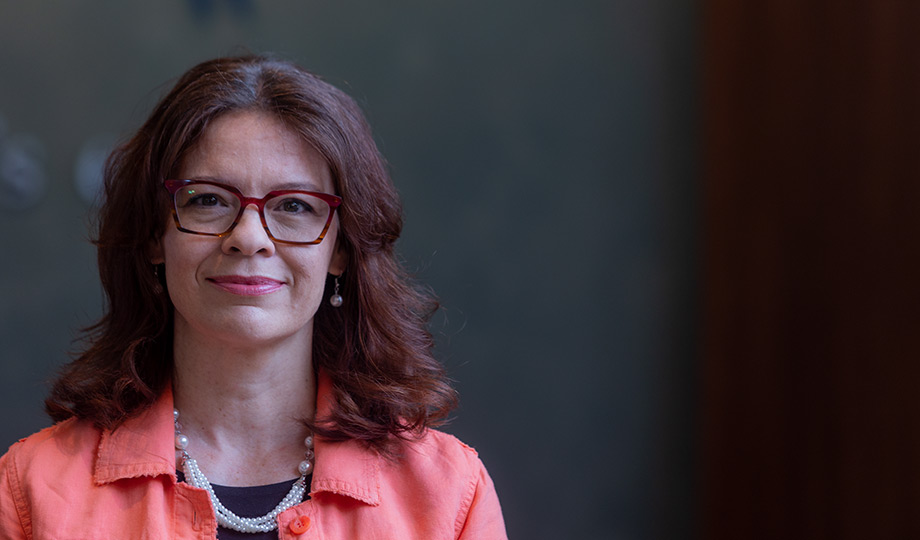 Bonnie Bailey was standing in line at Panera Bread when she received a phone call from College of DuPage.

She had completed her first two classes the previous semester but decided to drop her next one before it even started. The call came from the enrollment team, and in her frustration, Bailey began telling her story to the woman at the other end of the line.

“The person asked me if I had registered,” she said. “I explained about my two classes and how they took all that I had to give, and that I wanted this but didn’t know how to get there. She encouraged me to take just one step forward and asked about the next class I needed. I said I could register for a PE class, and she told me not to quit.”

It was a crucial moment in Bailey’s journey to pursue the degree she wanted so badly to earn. More than 20 years earlier, she had put her dream of higher education on hold as life took her in other directions.

She had struggled in high school, especially in math, so her mom began to homeschool her. However, due to changes in the family, Bailey began to fall behind and, to move forward, decided to get her GED.

“I scored a 100 percent on the pretest and then passed it at COD. It made me feel like I had potential that I was not tapping into,” she said.

Bailey went away to college and was in her first semester when she was told that her dad’s kidneys were failing. After learning she was a match, she returned home and donated one of hers. It saved her father’s life; however, it also pulled her away from school, and she instead married and had four children.

The most rewarding part of my journey is that it was not about me. At COD, I found a community and a family.

“I put my education on the shelf,” she said. “When the ‘being a mom and raising children’ chapter of my life was coming to an end, I began to ask myself who I wanted to be, how I would show up in the world and what impact I could make.”

In 2016, Bailey was backpacking the Appalachian Trail and was working her way toward St. Johns Ledges in Connecticut when she decided to dust off her dream of college.

“I was in my 40s and reached a difficult part of the trail. I told myself, ‘If you can do this, if you can survive this walk, you can go back to school.’ I was scared, and it took me nine months to get the courage to do it. But I did finally register at COD for two classes.”

Meanwhile, to pay for school, Bailey took a job at Chuy’s in Warrenville and was trained as a server. For every basket of chips and salsa she served, she told herself that it was another step toward her education, and she saved all her earnings and tips for tuition and fees.

While she earned A’s in those first two classes, English and Speech, Bailey struggled with the technical aspect of her coursework.

“The academic landscape had changed since I had been in school, and I was unprepared for the digital shift,” she said. “I got a C on my first English paper and my professor, Franz Burnier, said I had to flick the academic switch inside me. For my next paper, I worked hard and spent so much time at the library, and I got an A. The academic switch had flicked, but I didn’t know how to flick the technical switch.”

The call she received at Panera convinced her to continue. Bailey signed up for Physical Education 1811, which was backpacking, and she earned another A. The next semester, she enrolled in two classes but dropped both because she could not keep up with the technology.

“I was drowning in technical ignorance,” she said. “I realized if I was going to do this, I needed to get help. That fall, I enrolled in instructor Erik Skov’s Humanities 1130 class and walked in with my phone held above my head. I announced, ‘I’m a mom, and I’m old enough to be a mom to all of you. I want to earn my degree, but I need help with the technology. Would anyone like to help me?’ Those kids dispersed and gave me a seat in the middle of the room. All semester they called me ‘mama” and met me at Starbucks and the Library. With their guidance, I learned how to become a student in the digital age.”

Bailey passed that class with an A. However, she also dropped another class and failed a third. Due to her past record, she was placed on academic probation.

“I looked at my GPA and got mad. With all my new knowledge and all my fury and grit and determination, I registered for a summer class and poured everything into it. I passed with a 98.6, and from that point forward, I got all A’s.”

By the end of the fall 2019 semester, Bailey had raised her GPA to a 4.0 and became a member of Phi Theta Kappa. She also received multiple scholarships from the COD Foundation: the DuPage Area Moms, Marriott Chicagoland Business Council Hospitality, James C. Kohler Memorial and the Certificate of GED scholarships. This allowed her to enroll full-time.

After leaving Chuy’s, Bailey took a job in COD’s Enrollment Support Center, where she was calling students and encouraging them to keep going.

“I became fully integrated into the world of COD, and it anchored me. I was able to focus and work hard. I provided guidance and mentorship to other nontraditional-age students who were intimidated by the digital landscape. Some of them are still pursuing their degrees and we have become friends. I had a tribe of supporters who cheered me on along my journey, including my children. Being a COD student alongside three of my four children is an experience I will always treasure.”

Her time at Chuy’s also exposed her to the world of hospitality, and she decided it could be a viable career path. Bailey then began working the front desk at the Inn at Water’s Edge, the full-service hotel on campus that doubles as a learning lab for students.

In earning her Associate in Applied Science degree in Hospitality Management, Bailey was named one the College’s two outstanding graduates. Her goal is to transfer to Johnson & Wales University, where she plans to pursue a business administration and entrepreneurship degree. She then would like to run her own bed and breakfast or boutique property.

“I have traveled to seven countries off the mass tourism grid. I love nature, enjoy backpacking and riding a motorcycle,” she said. “I would like to run a bed and breakfast and deliver an experience, perhaps somewhere with mountains, where people can step away from the noise of busy life and reconnect to nature.”

As for COD, Bailey cannot say enough about the school that cared enough to call and encourage her to keep going. Her goal is to continue paying it forward.

“You can get mad, cry, fail—but don’t ever quit,” she said. “I also want to be a lifelong learner. I have withdrawal if I’m not learning, and I’ve drilled this into all my children: Always pursue excellence.

“The most rewarding part of my journey is that it was not about me. At COD, I found a community and a family.”

Learn more about the Hospitality Management program at College of DuPage