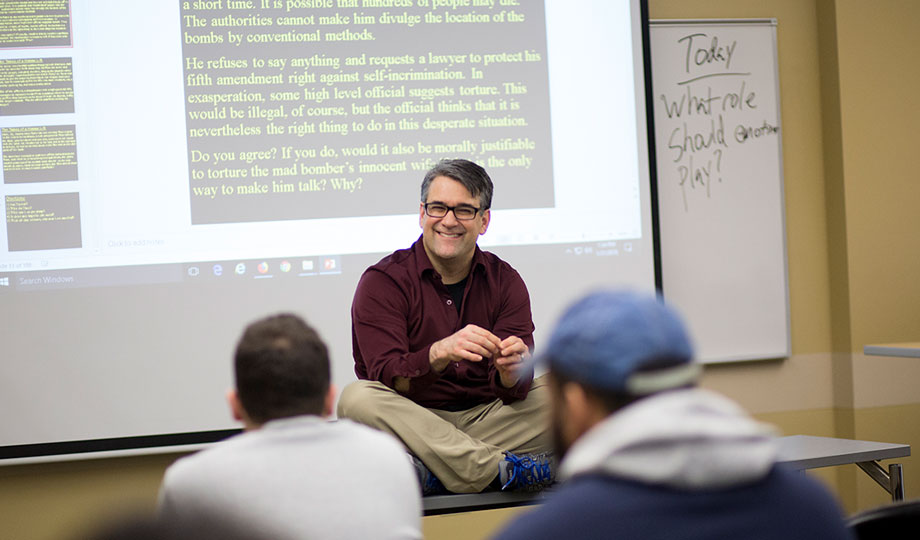 Although he loves to teach, Peter Kanetis originally wanted to be an actor.

He earned his bachelor’s degree in Communications, with an emphasis in radio, TV and film, from Loyola University. In 1995, he moved from the Chicago area to Los Angeles and spent eight years pursuing acting full-time.

“Unfortunately, I was part of the 97 percent who was not making a living as an actor,” he said. “To help make ends meet, I was substitute teaching in various Los Angeles high schools. Being in the classroom made me fall in love with teaching.”

Kanetis decided to return to school and enrolled at Biola University, where he earned two graduate degrees: in Christian Apologetics, a branch of theology, and Philosophy.

“I’ve always been fascinated with the ultimate questions in life,” he said. “Ever since I could remember, I would ask questions of why, questions of philosophy and nature, and anything else that really intrigued me. And whenever I would bring up these issues and questions in the classroom, I noticed that students had a hunger to discuss and learn more about them.”

Kanetis taught philosophy and theology for one year at a high school in Riverside, Calif. But he wanted to dig deeper into the subject matter, especially during classroom discussions, and decided to teach at the college level. Moving back to Chicago, he began looking for positions and was hired as an adjunct at College of DuPage in 2010.

Because of his acting background, Kanetis enjoys combining religion and philosophy with his love of storytelling.

“I tell students that life is too short to miss the real thing, so seeking truth in every area of life should be a priority for all of us,” he said. “That way, we increase our chances of making wise decisions and gaining some happiness in this tough, tough life.”

What Kanetis enjoys most about teaching is helping his students gain critical thinking skills.

“Albert Einstein said, ‘Education is not the learning of many facts, but the training of the mind to think.’ The goal of teaching goes beyond giving students content. We can use the content as a means to an end of developing their ability to reason and evaluate various points of view,” he said. “What excites me most is helping my students become better thinkers and develop a hunger for truth. I want ideas to bother them but in a good way.

“I cannot think of a better way to make a living than discussing philosophy and religion with students who are eager to dig deeper into these issues.”

More about the Philosophy/Religious Studies program