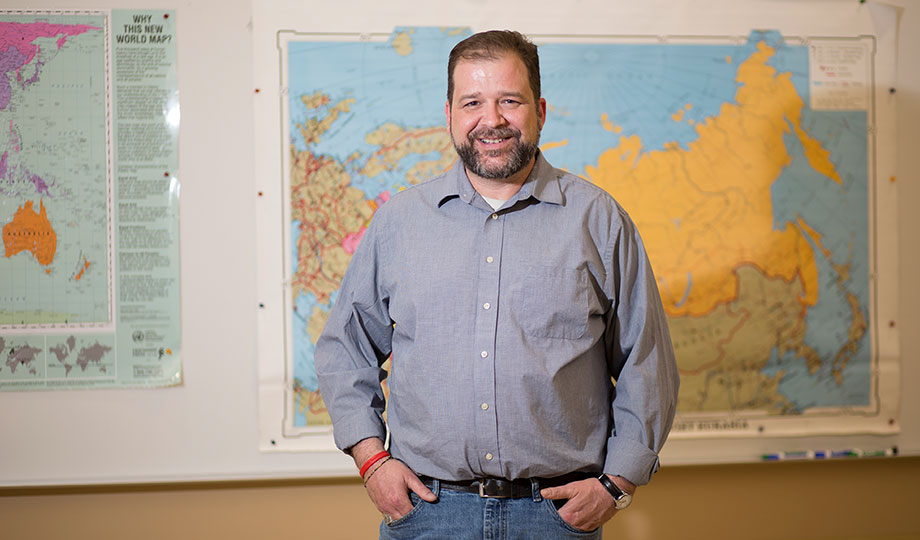 Scott Campbell always liked geography, even before he knew to call it that.

“I loved maps. I loved any book, movie or song that had a strong sense of place,” he said. “But like a lot of people, I had no real idea of what geography was. I always assumed it was simply the where and what of place – where places were and what they were like. I certainly had no intention, or even passing thought, of getting a geography degree.”

During the fall semester of his junior year at the University of Missouri, Campbell took a geography class taught by Walter Schroeder and was hooked from the very first day.

“Professor Schroeder made me realize that geography wasn’t just where and what, but why,” he said. “I learned that geography didn’t just describe, it explained. All of those seemingly random geographic patterns – the big global patterns like climate, religion, language, politics, economics, as well as the local patterns of rich neighborhoods and poor neighborhoods, big cities and small towns, factories and businesses, all of it – had rational explanations. None of it was random. It was as if the secrets of the universe had been unlocked. I was hooked then, and I’m hooked now.”

Campbell earned his bachelor’s and master’s degrees at Missouri and his doctorate at the University of Kansas, and he worked as a graduate instructor at both universities. He also taught as an adjunct at a number of colleges in Missouri and Kansas.

Education is a family business, as Campbell’s dad was a teacher.

“I grew up knowing it was a tough job, much tougher than most would suspect,” he said. “But I have never in my life met a good teacher who ever regretted it. If you’re a good teacher, you never have to wonder if you’re making a positive difference in someone’s life. You know you are.

“Geography is a body of knowledge, but it’s also a way of thinking. Of course I hope that students leave my class with more facts in their heads than they came in with. But the really rewarding thing is when students tell me that they read something or saw something and understood it in a way, and thought about it in a way, that they never would have before taking my class. That’s the real business of education – increasing curiosity and awareness. Give them something to think about but, more importantly, make them want to think about it.”

What motivates Campbell are what he calls the “everyday things.”

“I love the little rhythms of the world, the business of ordinary life. Geographers love to make generalizations about the world, but I like to remember that the world is made up of seven billion simultaneous biographies,” he said. “Whenever and wherever I’ve travelled, I’ll go look at the stuff on the cover of the guidebook. But my best stories and favorite memories are made in out-of-the-way places and in the middle of everyday life – in diners, railway stations, bookstores, markets and barber shops. Conversations with bartenders or cab drivers. I like conversations in everyday places with people living their everyday lives. Of course, I always start with ‘Where you from?’”

More about the Geography program