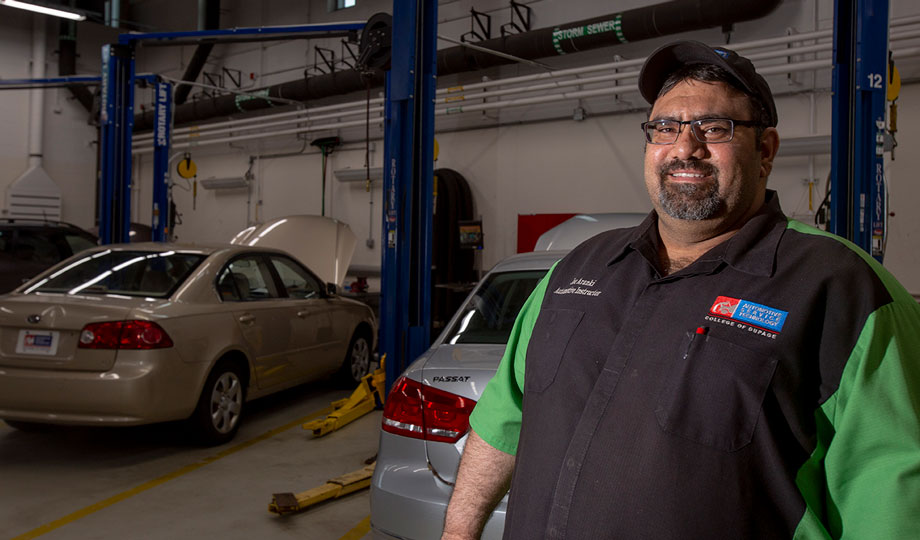 Joe Aranki’s interest in cars started with his father.

“My dad worked at a factory his whole life. To make ends meet, he would fix cars after work and on the weekends,” he said. “I grew up holding the light for him. I loved watching him try to figure out what was wrong, and it was very satisfying watching him take what was broken and make it work again. My favorite part was seeing how happy it made his customers when their cars were fixed. I just really wanted to be able to do all that.”

After high school, Aranki studied automotive technology and found work at a shop in Bartlett. He was given the opportunity to purchase it a short while later and, with help from his family, he did just that. But when property values started to climb, Aranki’s landlord offered to buy out the rest of his lease.

Aranki worked several other jobs after that but eventually decided to pursue education.

“Many of my family members are educators. However, neither one of my parents went to college, so the thought of a traditional college education was very intimidating to me,” he said. “Fifteen years after graduating from high school, I did attend a community college to earn an Associate in Applied Science degree.”

Aranki followed that with a bachelor’s degree from Pittsburg State University and then a master’s degree in education. He was teaching in southwest Kansas but wanting to return home, so when a position opened at College of DuPage, he eagerly applied and was hired.

His goal is to help students understand that their education is not just about fixing cars.

“It’s about using your skills to solve the puzzle,” he said. “It’s about doing it the right way, even when the wrong way is easier and pays more. It’s about pride in what you do and the way you do it. And finally, I want them to know they will have this career for the next 45 years of their life, but it’s the stuff in between the workdays that’s more important and should be valued.

“I think everybody likes it when you’re explaining something and they completely understand what you’ve said. Every educator strives for it—the ‘ah-ha’ moment. However, what really inspires me are the calls and emails from students six months, one year or even several years after they’ve graduated. For them to take the time to express how much of an impact you’ve had on their journey is so humbling. When they tell you they now understand what you were saying and thank you for it—well, it really gives clarity about what your role is, and it’s not always just about fixing cars.”

For Aranki, teaching automotive technology combines two of his passions.

“I know it’s overused sometimes, but they say to choose a job you love and you will never have to work a day in your life. It must be true, because I don’t feel like I’ve had to go to work yet.”

More about the Automotive Technology program